And yet again the updates are extremely similar to Facebook. Should we start calling the Hotel Habbobook Hotel? 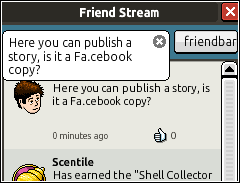 Only a few weeks ago a poll was put forward by Habbo Research Staff, Yurre, asking the users of Habbo what they’d like to see displayed in the Friend Stream. It appears that the poll results have been collected and the Friend Stream put to the top of the priority list in the Habbo Offices. Two new features have been added, or should we say copied, from the popular site, Facebook.

The first feature, which is set to popular amongst users is a ‘like’ button. To be honest, we think everyone will welcome this feature, it so much simpler to click ‘like’ than to write out a long comment and have to respond to every reply it gets. As of yet the ability to ‘comment’ on activity is unavailable, although we won’t be ruling it out in the near future. The second update allows users to publish a story onto the friend stream, which can then also be liked. Personally I’m torn between this feature, if Habbo updates the stream again to allow comments there will hardly be any point in entering a room to see what’s going on or even to have a group conversation.

What do you think of these new updates? The Friend Stream as a whole reminds me of a virtual version of Facebook. What other features would you like to see?