In June 1969, the Stonewall riots began and subsequently aided in the beginning of the gay liberation movement.  Now every year we take an entire MONTH to celebrate all that is good about the LGBTQ+ community; the opportunity to be able to be who are you proudly, thanks to all the people who fought back against the social and political injustices that the community regularly faced and continue to face today.

While Pride month took place in June, as it does every year, in the Habbo-verse we’re celebrating Pride in July!

As usual, Habbo will be releasing FIVE new rares – aren’t we lucky?!

First off we have a lovely rare hairstyle; the Teased Hair. Two different sections of this hairstyle can be coloured separately – these being the roots and the rest of the hair.

Next up, we have the Holographic Suit Jacket! Reminiscent of the Frank’s Tux rare that was released in July of 2020, this jacket will make you fit to dazzle on any occasion. Personally I love this as a clothing item, but perhaps not as a rare…

The new rare Waterfall Wall will also be released next month, serving as a beautiful zen feature fit for any garden. Though this furni item is beyond beautiful and sure to feature in many future builds, I can’t help but feel like it doesn’t completely fit the theme of the campaign… but after playing around with it on Photoshop it does look good alongside the other Pride furni items!

Another piece of furni ideal for all your garden needs, the Classy Rose Bench! As seen backwards in the image above, the wooden bench comes with a mini roof of its own to block out those blinding sun rays and two glasses of bubbly – for you to either share with a pal or drink your loneliness away.

The final rare we’re set to see released is the Kimono by -Push,! For those who remember, back in April a competition was launched in which global Habbo Hotel players could design a new clothing item – the winner of said competition was -Push, from the Spanish Hotel with this STUNNING kimono. All profits from the purchase of this rare will be donated to Save the Children Spain – so be sure that you help support this amazing charity!

Another month, another LTD! This month,  we will see the release of a brand new Rainbow Boa. Not only does this beautiful creature make for a gorgeous addition to your room – but it also functions as a seat! Usually I don’t care too much about LTDs, and have never actually bought any – but seeing this beauty… the colours, those eyes… AAHH I LOVE IT. I am definitely going to find myself extremely poor at the end of this campaign.

While we’re set to see the return of the trio of Sweet Home Bundles and the Summer Festival Bundle (good news for anyone who’s wanted to get their hands on a Habburgers Food Truck!), next month Habbo are SPOILING us rotten with two new  room bundles!

Fitting with the Summer season, July will see the release of two new bundles; the Water Park Bundle and the Natural Swimming Pools Bundle.

The Tropical Thailand campaign brought us two new crackable items – and it seems that next month we get more! Habbo are giving us two brand new crackables; the Foil Goodie Bag and the Pride Goodie Bag!

The first goodie bag, the Foil Goodie Bag, will contain classic Pride items that were released with the previous campaign from 2019 – rainbow furni galore! As well as this, Habbos will get the chance to get the rarer crackable – the Pride Goodie Bag!

The Pride Goodie Bag contains all the new furni and clothing (see below!) that is set to be released with this campaign – and each unit of this crackable contains the new Pride Flag furni as well.

Make sure to check the probabilities for each crackable in the article that will be published by Habbo when the campaign is released!

The next campaign will also give us four new clothing items!

While we will be getting two new rare clothing items, we also get some extra pieces from this campaign! This includes the Pride Stripe Hoodie for the perhaps more subtle Habbos, and the Winged Harness and Pride Cape for those who want to show off the rainbow colours! Clothing aside we also have another hairstyle on its way…

The Rainbow Undercut! A lovely short hairstyle, it’s an opportunity to be as BRIGHT AND COLOURFUL or as subtle as you like while still showing off your rainbow colours.

As well as the re-release of classic Pride furni, a set of brand new Pride-themed furniture is coming our way next month!

While the 2019 Pride campaign gave us the rainbow flag dispenser, and the Posters and Flags line supplying us with a rainbow flag wall item, the upcoming campaign gives us the Pride Flags. As well as showing off the updated Progress Pride Flag – when double clicking this furni it can be changed into the Bisexual Pride, Lesbian Pride, Pansexual Pride, Non-Binary Pride, Transgender Pride and Asexual Pride flags! 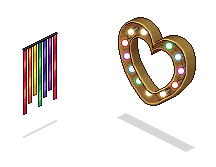 We also have two more wall-based decorations – the Rainbow Tinsel and the Rainbow Heart Light. We also have the Festival Balloon Arch and the Path of Pride coming up! While I’m not a huge fan of the former two, I do love the Path of Pride and Balloon Arch – for a while now people have been using building blocks from Builder’s Club to create a rainbow road similar to what the Path of Pride is offering, so I think it’s a great addition for builders! I also love the slight subtly of the colours as opposed to the bright rainbow that we’re used to seeing.

What do you think of the upcoming campaign? Are you as EXCITED for the Rainbow Boa as I am?

I really love this furni, I am really looking forward to the new items & clothing.

Cant wait for these to come out I’ve been saving up credits !!!

Words CANNOT EXPRESS how excited I am about this bloody LTD, I hope it’s fairly cheap (for a LTD) but I have a horrible feeling it’ll be 750c. Also I may or may not have bulked up on the teased hair today, I have a feeling that that one will be pretty popular lololol

Didn’t realise the snake was hollow that’s hilarious, not a big fan of how the new clothes are 2.5% from a bag but I guess I’ll live 😛

I think it was Reece I was talking to about the probabilities yesterday, I’m really conflicted. On one hand YES it would be great if you had a higher chance of getting the clothing items so you didn’t have to spend so much to get them but also I guess it’s a good thing for traders, the lower the probability the rarer it makes the item so I guess in the long run it’ll be worth more.

Honestly pretty excited for most of this stuff.
I wish the colors weren’t so across the board for the Pride furni… It would be pretty cool if you could “use” them to make them different washes of Rainbow, maybe?
Is it just me or should the Pride Goodie Bags reflect WHATS ACTUALLY inside!
I’ve enjoyed this article (can’t wait for more to come!!!) and I’m eagerly awaiting the arrival of all of the above!!!!!

I think that having that “use” function in the capacity you mentioned would be amazing! If only Habbo thought like that, big sigh.. But yes I fully agree with what you said about the goodie bags! It feels like they were just an after thought, very boring to look at which is a shame.. I feel like there’s a lot more that they could’ve done with them.