When you think of old school Habbo, a few things that probably come to mind include the lido, BubbleJuice and celebrity visits. Now what if I told you one of those things was set to make somewhat of a comeback in November?!

No, Beyoncé isn’t coming to the Hotel, and no there won’t be any diving so put away those speedos.

But you can expect to see some BubbleJuice!

While we’re not set to see any LTDs in November, as always we have four fabulous catalogue rares to look forward to!

First of all, the Harvesting Braid will be coming our way next month. I have nothing to say about it. It’s a hairstyle. It’s pretty dull. I even asked ,jamiexo for her thoughts and she had nothing.

Missed out on some Logger’s Dungarees back in 2018 and wanting a newer, slightly less pretty version? You’re in luck! The Corduroy Dungarees are on their way to the Hotel this November.

Look familiar? No it’s not a Habbo Cola Machine, it’s the NEW rare BubbleJuice Dispenser! While this rare does wonders for nostalgia, it does feel slightly disappointing that one of this campaign’s rares is essentially an updated version of a Classical Rare.

We also have this fabulous Atmospheric Fireplace to look forward to! Personally I’m a big fan of this rare as, not only does it fit in well with the campaign’s theme and furniture line, but its multiple states mean it’ll fit in wonderfully with so many different themed builds!

All major fashion statements, the Drinks Hat, Lime Head, Cat Beanie and Cone Hat will soon find their ways into the catalogue.

We have TWO new crackables coming our way – the Premium Crate and the Produce Crate.

While it’s not yet confirmed exactly which items will be included in which crate, the following items are set to be obtainable from either crackable. 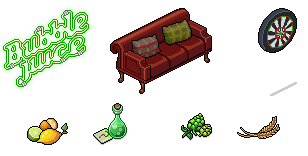 Another month, another crafting system!

However we have TWO new bundles to look forward to – the BubbleJuice Brewery Bundle (which I’d assume consists of new campaign items) and the Ice Cream Bundle, which will include the following exclusive furni items! 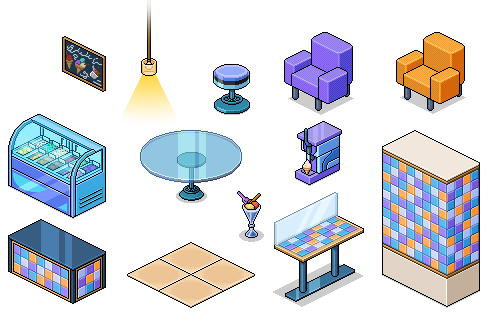 Aaaand last but not least we have a lovely small furniture line coming our way, fit for the pub of your dreams!

So what do you think of November’s goodies? Are you excited for the comeback of BubbleJuice?

The lime head looks like how I feel whenever someone speaks to me irl. Not totally convinced that I love all of this but in terms of what it’s FOR (ie: making a dive bar) it’s nice stuff

those exclusive bundle chairs are the quintessential POV you’ve just initiated yourself into pixel art and made your first chair ahhahhaahahahhh this is not a complaint, still!