2021 has flown by and we are once again approaching the spoOoOoOky season! This Halloween Habbo are taking us into the world of the Spirits of Japan.

“Read more” to see what we have to look forward to this Habboween!

The first of the four fabulous rares we have to come is the Cursed Mirror! Reminiscent of the Vanity Mirror that was exclusively released with the Creepy Dressing Room Bundle in 2016, once you interact with or “use” this mirror, you’ll get a rather frightening surprise in the glass…

More pretty than creepy, the Golden Flower Screen is the next rare on our list for October. This rare is seemingly inspired by the Byōbu – a Japanese folding screen. Although this rare doesn’t seem very Halloween-y, I love that Habbo are giving us a rare for this campaign that simply embraces the culture of its theme.

Our third rare and first clothing item is the Ninja Outfit! It’s honestly quite surprising to me that Habbo didn’t already have a ninja outfit, but this is one I’m certain will come in handy during any game of Cozzie Change!

And finally we have the Hime Cut. In Japanese, “Hime” refers to a princess or “lady of higher birth”. The famed “Hime Cut” is depicted as straight hair with a full bang and cheek-length sidelocks, as mirrored in this rare hairstyle!

In my opinion, it seems that Habbo have put some research and thought into this next month’s rares. While not all players will be aware of the real-life inspiration behind some of these items, it’s a great opportunity to invite the community to research and explore other cultures!

We have ANOTHER Limited Edition Rare coming this next month – the Grand Pagoda! This will be the NINTH LTD Habbo have released this year – which already makes 2021 the year with the most amount of LTDs released since 2015! I love everything about this LTD, from the gold rose on the door to the stone bottom that fits in perfectly with the rest of the campaign items.

In Japan, “tō” is used when referring to a pagoda – although these building have no defined function now, traditionally pagodas were used as a reliquary to house all sorts of relics.

Alongside the re-release of the Creepy Living Room, Freaky Fairground, Apocalypse, Haunted Hotel Room, Testing Facility and Bat Cave bundles, we have two NEW bundles coming our way this October!

The Misty Mountains Refuge Bundle and the Japanese Horror Film Set Bundle! Both of which are due to include items from this campaign’s own furni line.

We also have a new Crafting System to look forward to! It’s currently unclear exactly how this crafting system will work – however! You WILL need a Scroll Altar – this is the crafting table.

The two main ingredients in this crafting system are the Magatama and the Purification Scroll.

Using the Magatama and other furni, you’ll be able to summon some Japanese spirits – then use the Purification Scroll to purify them! These including:

The Oni – a demon in Japanese culture, that usually have a wish to hide and remain unseen.

The Kitsune is an intelligent fox with paranormal abilities, including having the ability to shapeshift and appear as human.

The Kappa, which translates to “river child”, is an amphibian creature with humanistic qualities. The dish of water on its head is believed to be the source of its power and, if spilled or lost, will weaken the creature.

And finally the Nekomata – there are two different origins of this creature. Some believe that they lived in the mountains and were described as “mountain beasts”. Whereas others believe that domestic cats grow old and become Nekomata.

We also have three new clothing items to look out for – the Ghostly Headband, Spirit Flames and the Onryo Hair.

All of these items have many real-life ties. The Ghostly Headband is inspired by the Hitaikakushi, a headband sometimes depicted as worn by a Yurei (Japanese ghost). The Spirit Flames have taken inspiration from Onibi; an “atmospheric ghost light” that has been known to appear within Japanese legends. As for the Onryo Hair, dishevelled black hair is a commonly noted physical attribute of an Onryo, a ghost which is said to be able to cause harm to those still in the living world.

As well as all the brilliant items that have been mentioned so far, we also have an entirely new furniture line coming our way! Check it out below! 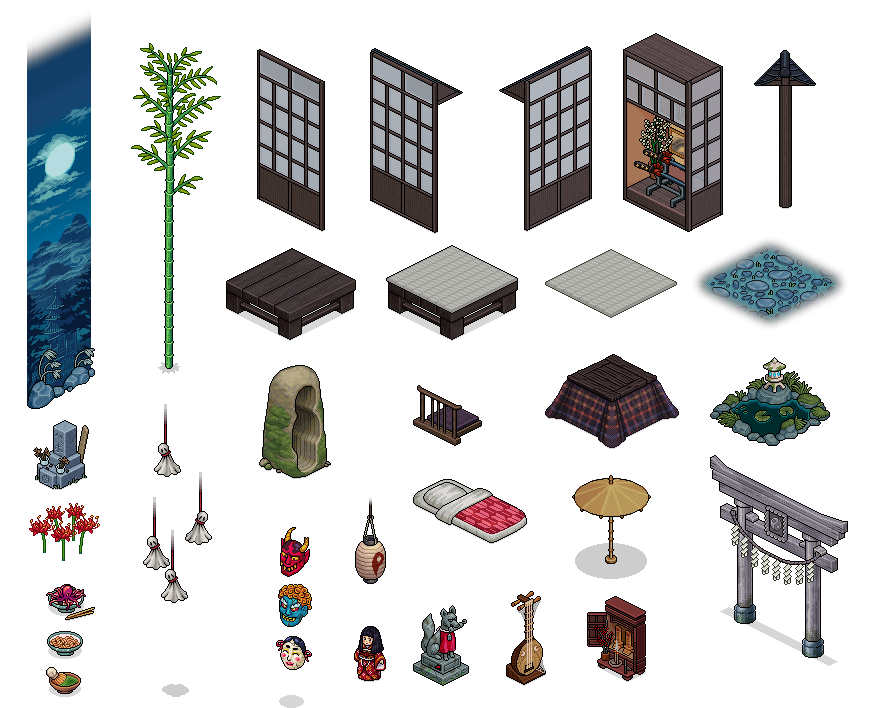 wow what an article

The tiny furni is my fav ofc, but I’m excited to play with all of it. The hanging ghosts is prob my favorite because creepy. GIVE IT ALL HEREEEEEE!
Here’s hoping crafting won’t cost too much!

I love it all really! new things to wear always great and I always fan of habbo ponds and there is new one here 🙂 I love LTD maybe this time I can be lucky have it as I keep miss out on the other recent LTD’s

I’m SO pumped for the new crafting! The rares are great, but I only personally like a few of the new furni, but still love the overall concept this year.
SpoOoOoOky season is so close!
Great article 😀

Not too keen on the furni tbh but the Kitsune looks kinda cool!

Ohh little Kappa river child is the cutest cuddliest little creature. I want to play peek-a-boo with the little fella

absolutly love the attention to detail from habbo !! can’t wait to use the new clothing items and have a go with the crafting !!