Welcome to the first (revived) edition of The ‘Box!

The ‘Box is a monthly Habbox newsletter created by lawrawrrr back in 2014 and was published monthly until June 2015. However, it’s now being revived in the form of an article to keep you all updated on the latest gossip and events of Habbox. This month we’ll be providing you with some Habbox quotes, information about our biggest annual event, a trip down Habbo memory lane to look back at past July releases, chances to win plenty of Credits… and much more!

● This Month in Habbox History

Note: Clicking on a header will take you directly to that section!

July has been a popular month for birthdays because not only was Habbo celebrating its 18th birthday, but we were also celebrating 15 years of Habbox too! Habbox was founded in Summer 2003 by Mizki, and over the last 15 years, we have seen seven site versions, 9 General Managers, and thousands of staff members. We’ve also had 130,745 members to sign up to the forum, 812,557 threads created, and 8,121,282 posts created during this time.

To date, we’ve held 62 official badge events on Habbo, including two badges that were available during our birthday celebrations! If you were online, you might have made an appearance at our birthday party where not only were there Credits up for grabs but also an exclusive badge for showing your face (see left). We also had an official badge event based on the memories of Habbox members. All users who completed the event were awarded a badge (see right).

In case you missed it, here are some memories from various members on our forum:

We hope you enjoyed the celebrations. Here’s to the next 15 years!

It’s just turned August and that can only mean one thing – it’s nearly time for the 12th annual Habbox Summer Spectacular tournament. This year, the tournament will be held from the 10th-20th of August and it will be packed full of Fantasy-themed events, games, and competitions that will bring you plenty of opportunities to win hundreds of Credits! Here is some important information about this year’s tournament, including the available teams and information on how to join these teams…

What are the teams?

How do I join a team?
To join a team head over to habbox.com/hxssteam and register your interest to join whichever team you want. Be sure to select a second, third, and fourth choice in case your first choice is full!

Did someone say something silly? Screenshot it and send it in by clicking here. Be careful what you say or you could end up here next month!

I was asked by our lovely Assistant General Manager of Content to make you guys a list of the top 10 songs played on Habbox.com in July, and to be honest, I’m really not surprised at some of the songs on this list!

So let’s get started with number 10:

7) Eminem – River  (Feat. Ed Sheeran)
So, jumping in at number 7 is Eminem ft Ed Sheeran with River. Released in January 2018, it’s not even a year old! Like the others, this song reached a high of number 1 in the UK charts.

6) Little Shop of Horrors – Dentist
Well, I think the title says what movie this song is from, Little Shop Of Horrors. The movie was released in 1986 but still going strong! I love to lay back on my sofa with some snacks and watch the movie and sing along with the songs.

4) Rag’n’Bone Man – Human
Straight in at number 4 is RagnBone Man with Human. I remember when this song came out in July 2016 for digital download. I remember Human being such a hype, everyone wanted the song. The sing basically explains that everyone is human, I think people could relate to the song.

3) EO – German
Taking the bronze spot in the countdown is EO with German. This is another song that was a hype when it was released back in March 2018, only making it less than 3 months old! It did however only reach number 13 in the UK charts.

2) Britney Spears – Toxic
Claiming the silver spot in our countdown is Toxic by the Princess of Pop – Britney Spears. Released in January of 2004 it reached a high of number 4 in the UK charts but just goes to show it’s still going strong more than 14 years after it was released.

Now we get onto the top spot! But before we do, let’s do a quick recap of the songs that sadly missed out;
10) Daniel Bedingfield – If You’re Not The One
9) Rixton – Me and My Broken Heart
8) Black Lace – We Are The England Fans
7) Eminem – River – ft Ed Sheeran
6) Little Shop of Horrors – Dentist
5) Paloma Faith – Only Love Can Hurt Like This
4) Rag’n’Bone Man – Human
3) EO – German
And just missing out on the top spot this month is;
2) Britney Spears – Toxic

Now onto the most played song in July 2018;
1) George Ezra – Shotgun
This newly released song by George Ezra was released in May 2018 making it only 2 months old. I know all the words to this song and I doubt I’m the only one. This song was released at a great time. In the music video, it shows George on a beach which is what we’re all doing in this weather!

Well, that brings us to the end of July’s most played songs on Habbox.com. Can’t wait to bring you the next edition!

In July, the Habbox Birthday celebrations had everyone reminiscing about the amazing 15 years of Habbox, and now Habbo is celebrating its 18th birthday!

Looking back at Habbox’s history from over the years got me thinking about Habbo’s history which, of course, is huge. So I’ve condensed it down to a little timeline of only things that happened in July so we can see how different Habbo is compared to this time every year it’s been around!

2001
Habbo had been open for almost a year and was growing in popularity. Sulake were working on improving the number of disconnections which were common despite the user limit of 750 at a time.

2003
The original four colours of the Fountains were released.
[EDITOR’S NOTE: Most importantly this year, Habbox was born!]

2004
A common theme of the weekly Newsie was to look out for scams. Some scams at the time included selling cameras with film (which was not tradeable) and asking for payment to fix a bug where furniture became stuck in the wall (which only Hobbas/Staff could fix).

2005
The origins of the Infobus poster are not clear, but the earliest it can be traced back to is staff rooms at this time.

2006
Habbo China opened up to the public and was the latest addition to the growing number of hotels around the world. Meanwhile, on the UK hotel, Habbos looking to go for a swim at the Lido found that the pool was closed…

2007
The first Japanese furniture range and campaign were released.

Games that had only been available with tickets, such as SnowStorm and Battle Ball were made available for free. The Habbo eXpert program was also shut down and replaced with the new “guide” program.

2009
The new Habbo Beta was opened to the public for everyone to try after being available to a select number of users. For many, this was their first look at the new Flash client but they could still swap back to the Shockwave client in the meantime.

2010
This year’s summer was based around the beach with the new Big Wave furniture range, which brought lifeguard towers, beach balls and water patches.

2011
Black Holes were released which meant more customisation of room sizes. Turtles were introduced as a new pet and Coco was the newest furniture range.

2012
There was a verrrrrry quiet patch mid-year as Channel 4’s damning investigation into the potential for sex crimes on Habbo resulted in The Great Mute, where no-one could send messages of any sort. After this, a new chat filter was introduced and Home Pages were removed as they were too difficult to moderate.

2013
The Habbo Palooza campaign introduced tents so secret conversations could happen without whispering.

2014
Diamonds, which had been around briefly during the Jetset campaign in 2012, became a permanent currency, replacing the Loyalty Points system.

2015
2015 was Habbo’s 15th birthday and the celebrations started a whole month early. Many old rares were recoloured in Maroon and quickly became a collector’s item.

2016
The Habbo mobile app got a new and improved UI update. Right at the end of the month, HabboLympix returned to celebrate the Brazil Olympic Games.

It seems like a bit of a cop-out to do my first Habbox History article on something that was so heavily celebrated earlier this month but how could we not? As you may know, Habbox.com turned FIFTEEN in July, and the forum turned 14. Fifteen years is a long time for any website to keep going – let alone a community forum so coming this far is a great achievement for all of us.

There have been loads of ups (like the launch of HabboxWiki!) and some downs (which we won’t go into) but just think… fifteen years (and a few weeks) ago, one lonesome Habbo called Mizki said “let’s set up a community fansite for my favourite game“… And the rest is history! Without it, we wouldn’t have each other, the wonderful events and radio shows and competitions and quizzes and articles and everything in between. I wouldn’t have met so many amazing people and I certainly wouldn’t have learnt what I have and we always hope we provide the same to ALL of you!

Find out more about Habbox’s history as a whole here:

This month, the Competition Department brings you two chances to win 20 Credits by entering the following competitions.

The first competition asks you to spot the differences between these two images below. Once you’ve found them all, highlight them, and submit them via this form HERE. Remember to select Competitions in the drop-down menu before submitting! 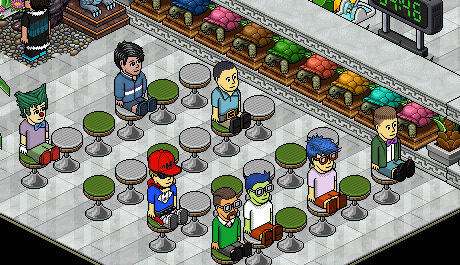 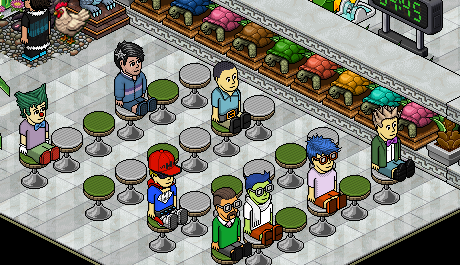 The second competition asks you to guess what item Cameron is looking at in the image below using the following clue:

“I spy with my little eye something that is orange and white.” 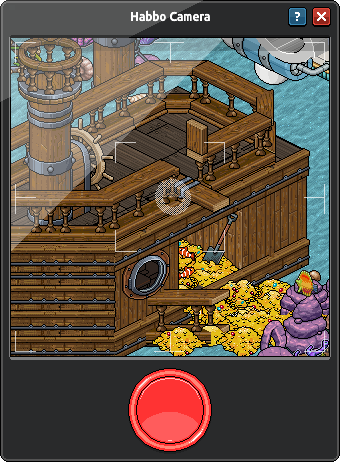 Once you think you have figured it out, comment on this article with your guess!

—————————————
That’s it for this month! If you’d like to contribute in some way for next month’s edition, feel free to contact me on HabboxForum (Sho) or via Habbo (Shonly).
If you’d like to offer feedback, which I’d greatly appreciate, please submit it via this form and selecting Feedback in the drop-down menu at the top!
Special thanks to the following people who contributed this month!:
Yellowbelli
Cameron446:
lawrawrrr
Ekelektra
Conor
Thanks for reading!
Share on Twitter