In 2003, a Hobba (volunteer Habbo moderator from the old days) named Mizki decided to start Habbox as a small personal project. Who could have imagined what it would grow into over the years leading up to today?

In this article, we’re going to take a little look through some Habbox trivia, history, facts and figures!

Almost all Habbox departments were created during the first year of opening. The first Department Manager was DJ-WIERDO as Articles Manager hired on 22 June 2004, followed on 27 June by MissAlice (Comps) and Properclone (News).

Over the years we’ve had 298 managers. One person has been manager 14(!) separate times… and 3 people have been manager for just 1 day. Oops!

We’ve had 42 people in General Management roles, but only 13 have had the official title. lawrawrrr is the longest serving General Manager – having held the role for almost 6 years.

There have only been 3 owners – Mizki, Sierk and Jin, but they don’t have much to do with the day-to-day running of the site any more.

Although we’d been making badge events since 2013, Our Room Builders department was launched in 2015. We believe this was the first official Building department on the .COM hotel.

Possibly our ‘most famous’ department, Habbox Rare Values was known across the globe at one point in history. We still get messages or notice posts to this day of people reminiscing! Fun fact though – Rare Values was actually not in action between 2016 and 2018, as the management then decided to launch Version Seven without that functionality. We now have over 1,000 products and Rare Values have been visited over a million times since the system relaunched. 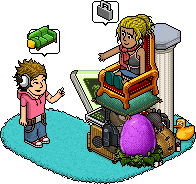 HabboxWiki is the newest member of the Habbox family – it launched in 2012 and has gone from strength to strength since, keeping a track of Habbox and Habbo history. It’s been edited over 122,000 times and has 2,380+ pages and 20,000+ files (wow!)

In 2004, we became an official fansite for the first time! It was a little controversial because we lost it soon after due to some personal incidents involving a certain former hotel manager… tut tut. We gained it again in 2008 though after coming out on top with public voting.

We’ve had (at least) 125 badges on the Hotel for our official badge events.

It would be impossible for us to count the number of DJ slots or events we’ve hosted, but we reckon it’s somewhere in the tens of thousands, and hundreds of thousands of credits, furni and other prizes given away in that time. We did some calculations and we think we give out about 30k – 40k credits per year all around. Thank you to all our staff for their generosity! 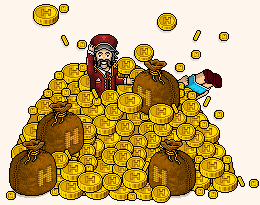 A big chunk of the prizes we give out are won during the Habbox Summer Spectacular, our annual 4-team tournament that takes place as you may guess in the summer. The tournament has run every single year since 2007 and showcases what we believe to be the best community gaming experience anyone could hope for, with literally HUNDREDS of individual winners each year across the 10 days of competitions and Habbo events. Some are out for personal glory of course, but the vast majority (including a big annual influx of lovely new members) truly get into the team spirit – so much so that there’s even a reward for “Best Team Cheerleader”!
Watch this space, the next one is coming soon…

People do of course come and go, and Habbox is not made up of the same people as when it started 18 years ago, but the core community values of providing a safe and fun environment for people on (and around!) Habbo has not changed. We work hard to keep this a friendly and welcoming space, and are immensely proud to still be going strong after all this time.

To wrap up this article, all of us General Managers want to say a massive thank you to all our community, readers, supporters and fans for making Habbox such a success for so many years, and a genuinely wonderful community to be involved with.

If you’d like to join us, find us down at the Habbox Help Desk, at our Events, apply for a job with us, or pop along to tomorrow’s Masquerade Ball at 8pm UK time (click here to see in your own time zone).

Loved reading this! Absolutely mental to think that Habbox has been around for 18 wonderful years. So proud to be a tiny tiny tiny part of it❤️