Aloe Blacc explained this man’s “crime” in one of his catchy songs “I Need a Dollar” and sadly, this man didn’t really get 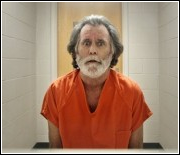 An 59-year-old American man by the name of James Verone attempted the robbery of a bank just for $1. Mr. Verone robbed the bank so he could be arrested and taken to jail and be given free health benefits as he has mainly health problems. Sadly they do not believe that Mr.Verone will receive his benefits. His attorney Micheal Neece said in court, “This is a man who is a veteran, a man who had worked his whole life for the American dream,” trying to support his argument that it is beginning to get harder for Americans to get health care.

This man has been charged with larceny from the person, and is being held on a $2,000 bond. Verone doesn’t want to post bond since this may prevent him from receiving his health care benefits. In my opinion I agree with the attorney as the economy in America makes it harder for people like Verone to get health insurance, and something needs to be changed. If you have an opinion on this subject and rather you believe Verone is just stupid, or if he is honorable for doing what he did, press comment below.