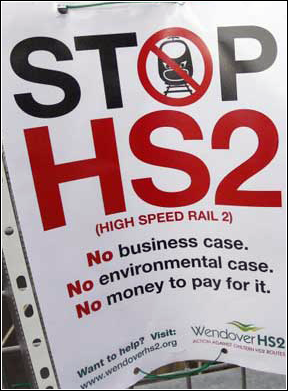 have recieved mixed reactions after the UK government has approved.

HS2 (High Speed 2) is a new rail network that has approved by the government. Although the public are thoroughly criticizing the approval. The Transport Secretary, Justine Greening told members of Parliament it was time Britain updated its Victorian railways.

The HS2 rail network will cut the time it takes to travel between London and Birmingham from the current time of one hour and 24 minutes to just 49 minutes.

The London to Birmingham segment of the rail network will cost £17bn, extending it to Manchester and Leeds a further £15bn, Totalling a massive £32bn.

The route intersects many areas of natural beauty, therefore sparking the main reason for criticism.
Posters have been placed to raise awareness of the situation.

I have no thoughts on HS2. However, I’m not affected directly by the rail network.