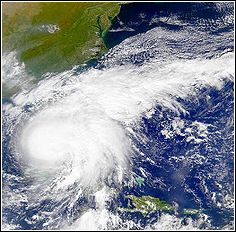 A hurricane majorly threatens the US for the first time in three years!

The US has not been majorly threatened by a hurricane in three years, but here comes Irene. She has already left a destructive path behind her across the Caribbean, and is currently gathering strength while over the tropical waters headed toward the US southern states. Officials in Florida, Georgia, North and South Carolina are keeping a close eye on the storm as it approaches.

Forecasters are saying the storm could reach Category 4 before hitting the US. This means the storm could have winds up to 131 mph. It is predicted to hit the coast of Florida this weekend. Forecasters have also predicted that it will hit the coast of Florida before turning and heading up toward the Carolina’s, meaning Georgia could also be effected.

The last hurricane that made it to US land was in 2008. Hurricane Ike left a path of destruction in Texas before dissolving over land. Many people are stocking up on plywood, bottled water, and other food supplies in fear of the worst. Florida has not been hit by a hurricane since 2005 and officials want to make sure the citizens know how to prepare and what to do if the worst does happen. As for Georgia, it has been more than a century since Georgia has been hit with a storm of Category 3 or higher.