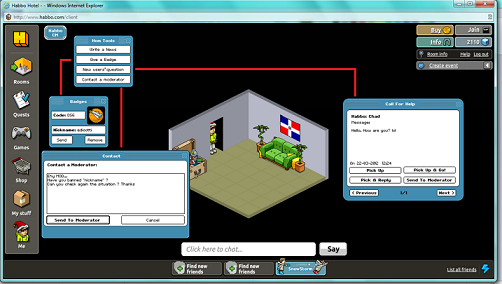 Click on the image to see the screenshot in its full size.


As Sulake developers and staff are working hard to churn out the latest project to keep Habbos safe and secure, many are waiting in excitement to see what the new HabboCM can bring to the table. HabboCM is currently progressing very rapidly, with the system tools already nearly fully put in place, as seen by an exclusive screenshot obtained from Sulake’s CEO Paul Lafontaine.

The project is almost a carbon copy of the old HabboX and Hobba projects, which had both their successes and failures. However, the tools used and the strategy of communication will be very different to past projects, with Lafontaine stating that HabboCM will almost be split into two separate undertakings in the initial alpha stage of testing. Lafontaine wants the project to be even smoother than such projects in the past with faster communication between moderators and CMs and faster response time to the user.  Many of the initial CM’s will be people with past Hobba/ HabboX experience in order to obtain the best and most experienced players. The HabboCMs themselves will be rolled out in May on Habbo.com. This means that there is plenty of time for Lafontaine and his team to test the system to see how many CMs will be needed and how it’ll work.

Lafontaine’s tips on getting a coveted CM role are to generally build reputation by helping others and keep a clean record. It is about reputation, not achievement. Nothing monumental, but something many can forget about. The reaction to the new preview and the system itself has been double sided. Some are extremely excited about the new system and are hoping that they can become a HabboCM, saying it’ll help Habbo a lot, especially getting moderation achieved faster and more fairly. Others say that it’ll turn out to be a flop and is just a cheap way to save themselves money on moderators, as well as being misused particularly if they are going to be allowed to give out badges. Only time will tell whether Habbo vets the right people for the job and whether they will indeed be effective. Tell us your views on HabboCMs by clicking ‘read more’ and commenting!