Let it rain (blue spheres) over me! 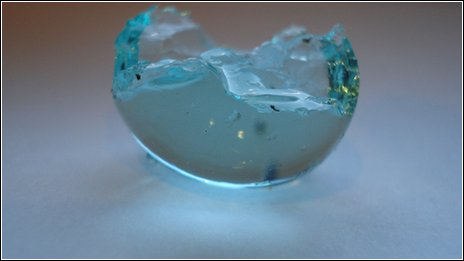 Imagine walking outside and discovering blue, jelly-like spheres falling from the sky… you would probably be very concerned! Well, this happened to Steve Hornsby from Dorset on Thursday afternoon. He claimed that the sky went an incredibly dark yellow colour followed by a hail storm instantly happening and thus producing ‘blue spheres’.

When the storm was over he proceeded to his garden and discovered blue, jelly-like spheres in the grass. He then went on to describe them as “non-sticky, impossible to melt and consisting of a soft shell”. He kept the ‘spheres’ in the fridge whilst he attempted to find out what they were… but the met office couldn’t provide much explanation either. They simply described the ‘spheres’ as “not meteorological”.

However, Josie Pegg from Bournemouth university speculated that the ‘sphere’s were probably “marine invertebrate eggs” which have been implicated in previous “mysterious goo incidents”. She also went on to say: “The transmission of eggs via birds’ feet is well documented, and if a bird was caught in the storm… then the eggs would have fallen from the sky.”

Hmm… quite a peculiar story – I hope I can encounter this 1 day!