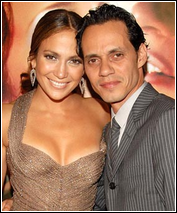 After 7 long years of marriage, Jennifer Lopez and Marc Anthony have split!

The couple have said: “We have decided to end our marriage. This was a very difficult decision” and “We have come to an amicable conclusion on all matters.”

The couple haven’t given a reason for their decisions but they have also added: “It is a painful time for all involved and we would appreciate the respect of our privacy at this time.”

Jennifer aged 41, is an actress and singer and her ex-husband Marc Anthony who is 42, got married back in June 2004 where they had a private ceremony in Miss Lopez’s mansion which is located in Beverly Hills. This isn’t the first time that Jennifer and marriages have come to an end; Jennifer has already been married twice before. Her first marriage was with Cuban waiter Ojani Noa and they were married for not even a year when they divorced in 1998. However, J-Lo found love again with backing dancer Cris Judd and they were husband and wife from 2001 to 2003.

Marc Anthony has only been married twice. His first wife was ex-Miss Universe Dayanara Torres where they lasted 4 years together; and have two sons. Marc and Dayanara’s marriage didn’t start of too great back in 2000 and they divorced in early 2002 but then renewed their vow’s in October 2002 at San Juan’s Cathedral in Puerto Rico.