Habbo have opened another chance for you to win a Journey 2 – The Mysterious Island Badge!

The Film:
‘Journey 2: The Mysterious Island begins when young Sean Anderson (Josh Hutcherson) receives a coded distress signal from a mysterious island where no island should exist. It’s a place of strange life forms, mountains of gold, deadly volcanoes, and more than one astonishing secret. Along with his Step Dad Hank (Dwayne ‘The Rock’ Johnson) they set out to find the island, rescue its lone inhabitant and escape before seismic shockwaves force the island under the sea and bury its treasures forever. Journey 2: The Mysterious Island (3D) is in cinemas from the 3rd
February.’ 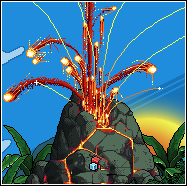 The Quest:
The Quest is still going strong, so if you would like your chance to win the first badge just take a look at this article.

The new film, due to be released in February has been advertised by Habbo for a number of weeks. This promotion involves a quest, a competition and a quiz and has given the applicants a chance to win 3 badges. If you want to receive the latest badge all you need to do, is head over to The Mysterious Island and take part in the quiz!

Make sure that you know a little about the movie as you will need some knowledge of it for this quiz!
Badges will be handed out on the 6th February.

Good luck to all the participants.