Lady Gaga’s second full length album Born This Way has regained it’s number one position in the UK album chart for a third time, fighting off strong competition from Adele, Take That and Bon Iver. 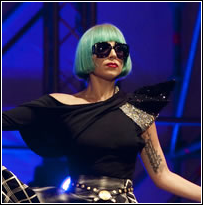 Rising up two places from number three last week, Gaga was given a boost by a well received episode of The Paul O’Grady Show, entirely devoted to the New York superstar, where she performed several tracks from the album including hits Born This Way and Judas, as well as a lengthy interview.

Over in the singles chart, American R&B star Jason Derulo gets his second UK number one with his latest single Don’t Wanna Go Home, pushing Example’s latest offering Changed The Way You Kissed Me down to number two after two weeks at number one.

Whilst sitting at the top of the album chart’s Lady Gaga’s Born This Way album’s third single The Edge of Glory returns to the top 10 at number eight, though not surpassing it’s peak of #6. The video for Katy Perry’s latest single Last Friday Night makes it the biggest climber of the week, just missing the top ten at number eleven, though it will surely rise next week.