*To find out more about the Summer Spectacular, click here! Also, don’t forget to read to the bottom to grab a point and the chance to win 20c!

Absently had just been on the phone for half an hour to a mystery caller, and had been making some very strange noises! She seemed very excited about SOMETHING… 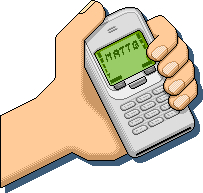 Five minutes later, she finally hung up. “Who was it?” Laura asked.

“I have a surprise for you! Well, xxMATTGxx does! He’s decided to upgrade us to an even BETTER hotel for your birthday!”

“That’s nice of him!” Lauren puffed. “He knows it was my birthday two days ago, right?”

“Come on Lauren, you’re coming too! Chin up chuck!” Laura said cheerfully. “It can be both of our birthday treats! And I’ll buy you some of those posh cocktails at the bar…”

A few hours later, they arrived at the fancy new hotel. Turns out this one was a celebrity hotspot, and they’d be sharing hallways with some of the best of Habbo management from years before who were all visiting for a reunion. Laura excitedly called Samanfa to share in their nerdy in-depth knowledge of Habbo’s history. She knew Sam would lose it that everyone from Ione to Lost_Witness to .beeches. would be there!

It didn’t take long to end up in the hotel bar. What else is there to do on a Vegas holiday, after all? Once you’re 21 of course… they were letting their pixel hair down!

A couple of hours and many many couples of drinks later, they decided to go wandering the halls. After all, they hadn’t seen ANY celebrities yet and the old hotel managers were probably the best celebrities they could hope for. They were all still downstairs for their reunion, but their rooms could provide some fantastic clues…

To get yourself a point for your team, comment down below with who you’d want to spot roaming the halls of our new hotel! Pick a Habbo-related character or you won’t get a point :lllllll

Bucho6! 😀 He was the first Habbo staff member I properly spoke to and he was lovely!

oh does it have to be staff IDK STAFF ahhhh awkward notmiceelf it will be then !

I think I would like to see the UK hotel manager from when I joined – Callie. She got fired and was a bit of a diva apparently! She would be a laugh!

Empired! The Green Queen has arrived! Hahah the first person i spoke to was lawrawrrr but since she is in this short, Empired is the second i spoke to so… THE GREEN QUEEN REIGNS

I know nothing but habbox members :O the reason I joined habbox is cause I was in one of rosie’s events on client so elegance

Pohjola because Pohjola was best.

It has got to be Lost_Witness

Ione she was the fabbiest, only staff member I ever actually spoke to I think 😮

.beeches. she is my favourite staff member she’s great!

Frank is the only member of staff I approve of.

neja, she was always so nice to me and would put me in research groups!