Get your skateboard on and win yourself a Heat Wave Games badge! 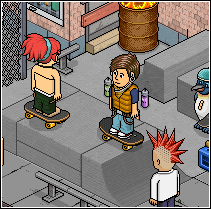 Last week saw the brand new Urban range added to the catalog, packed full of items to keep your summer full of excitement and skateboarding. A new pixel effect was also added, called the ‘Skate Effect’, which quite simply does what it says on the tin, letting you skate around the Hotel to your hearts content. There’s the Special Skate Effect, only available to HC and VIP, which lasts for an hour, and the Skate Effect, available to everyone and lasting an entire week. But what’s the use of a skateboard if you’ve got nothing to skate on except for flat ground? The Habbo Staff are definitely on the same wavelength this time, because they also added skate rails, skate platforms and skate ramps, all of which can be skated on, with a skateboard!

Now as if that wasn’t enough to keep you entertained for Summer, you lucky Habbos’ have been provided with your very own wired Skateboarding park! Officially entitled The Skating Gauntlet, this activity allows you to race against 2 other Habbos’ to navigate your way across the skate rails, platforms and ramps towards a lever which you must then pull to be teleported to the Winners Room. Once in the Winners Room a poll will appear and all you have to do to receive your badge is enter your name. However you won’t just be racing against each other, you’ll be competing against the ever watchful Kitchen Inspector, who also moves along the distance of the race track, if he beats all 3 of you you’ll all be kicked, so make sure you keep an eye on him. If you’re not successful in your first race you’ll be teleported back to the entrance, providing you’ve beaten the Kitchen Inspector.

In order to take part in the races you must own the skateboard effect, this is because the entrance to The Skating Gauntlet is blocked by Skate Rails that can only be crossed if you’ve got a skateboard. However this doesn’t mean you can’t watch others racing, you’ll just be restricted to the doorway. If you want to get into the room but not skate you could always put your skateboard on, do a 360 spin over the Skate Rail and then sneakily remove your board. If you enjoy doing quests and mazes with the wired furni, you’re sure to enjoy The Skating Gauntlet, the concept is similar and as usual, if you touch the floor you have to begin again! Finally, if the first room is too full you can check out the second room by searching ShoresofHabbo on the navigator.