Lindsey’s back in court once again, but this time it was a mistake! 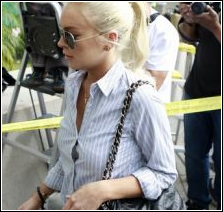 Over the past year Lindsey Lohan‘s life has been a paparazzi carnival, as she has had countless court appearances because of this she has become the center of attention for American media. Lohan is currently serving 120 day house arrest sentence after violating her probation after failing her court-ordered alcohol test. However, she didn’t even violate here probation at all! The original Judge in her case ruled that she was to undergo controlled substance testing from January 3rd, to February 25th, 2011, and after the 25th she was allowed to drink all that her little heart desired (that wasn’t a slam on her by the way), as long as she didn’t drive while she was drunk.

Lohan’s attorney said that “She’s done nothing wrong, she has done everything right,” and later added during a press conference, “I think we need to give her some credit for that. She wasn’t supposed to be tested at all after February 25th. Alcohol is a legal substance.”  Although she was not required to, some legal experts believe she should have been tested for drugs an alcohol while on probation. Will Lindsey turn her life around? What do you think? Click read more to add your opinion!