Join the team
DJLoading...
Now playing:
Loading...
...
Man blast's off own finger!0
By Habbox Archives - Posted 4th July, 2015 at 9:16 pm
38 year old Shaun Murphy narrowly escaped a prison sentence as he shot himself in his finger in an attempt to remove a wart. 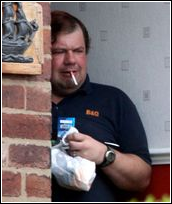 After trying a variety of different creams, the 38 year old B&Q security guard eventually got fed up of his very painful wart and decided the best solution was to remove it with a shotgun. As a result, the man blasted off half of his finger, thank god he didn’t have warts anywhere else…
Shaun Murphy came to this decision after a few pints at the pub with his friends and decided to use his new ‘cure‘ with a 12-bore shotgun.
This bizarre form of treatment immediately caught the police’s attention who then arrested Murphy for illegal possession of the shotgun.
Luckily, he escaped a prison sentence, instead receiving a 16-week suspended sentence which Shaun Murphy says he was ‘happy‘ with as he could of received a maximum of 15 years in prison, adding that his solicitor ‘did a very good job.‘
Shaun Murphy says he does not regret what he had done, although he did not expect to lose his finger. He said: ‘The best thing is that the wart has gone. It was giving me lot of trouble.’