The bank of England have announced that on the 2nd of November (2011), a new design for the £50 note will be introduced! 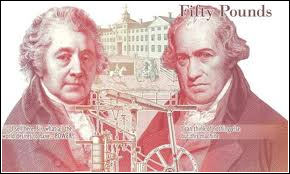 The new design was announced early in 2009, and in late 2011 it will come into circulation. The new design features entrepreneur ‘Mattthew Boulton’ and engineer ‘James Watt’, who pioneered the use of steam engines in manufacturing involving textiles. Also, it has been announced that the new note will have a wider range of security features. The new design is also unique because it features both figures on the reverse side of the note, it’s the first time 2 figures have been placed on the same side of a note.

Here a few other interesting facts:

Will you be looking out for the new £50 note design? Are you shocked by the total value of the notes? Share your view now by clicking ‘Read More & Comment’!