The new Habbo group window has been released! 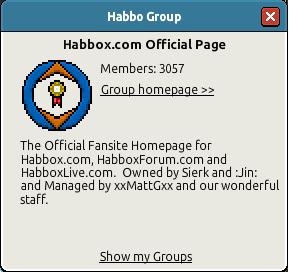 On August the 9th, the group window that appeared when clicking on a user’s displaying group badge was declared “Under Construction.”. For a time, this meant that seeing another user’s group had to be done externally, on the Habbo homepage. The message given when opening the window said: “The Group info window is being improved upon. The new Group info window will be available soon!”

Extra coding was then also added, specifically “groupBadgeInfo.enabled=false”, which means that at the time, the info for that group was disabled. Later, further coding came which detailed much of the look of the new window, an example of which you can see to the right.

Finally, the images were released and the recent maintenance break was used to implement the new design, holding much more information within the client, rather than on the separate Habbo homepage.

From the picture to the side, many new changes are instantly visible. Firstly, the image of the group badge is now displayed, along with the members count, a feature previously only found on the group’s homepage. Also implanted is the short description of the group, here showing Habbox.com’s brief summary. A list of groups you belong to can also be opened, from where you can change your favourite group (which is the one shown on your avatar).

What do you think? Do you like the new window? Or is it not the best of choices? What would you change if you could? Leave your thought below!