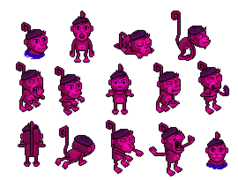 Not long ago, it was announced that Habbo will be releasing two new pets! A pet monster and a pet monkey! So far, we have not heard anything regarding the monster, but I can announce that we have an update… we now have pictures of the monkey!
To the right, you can see the image of all the monkey’s actions. As you can see, it has a sort of erm… strange hat to say the least. However before it was announced that monkey’s will be joining the pet section, many people were critising Habbo for the release of too many pets which were not only boring, but also unrealistic. However this monkey seems to have gone down rather well with the Habbo community, better than expected I must say.
Despite it’s silly hat, this monkey is quite impressive! Not only can it swim in water, but it also appears that it has several exclusive features, that the other pet’s don’t… If you look at the image above, you can clearly see that it can do some quite bizarre things like push ups! It’s also rumoured, that when the monkey is sleeping, it has one eye peeping out, the sneaky little things!

Thanks to Michaeel from HabboxForum for providing links to the images.