On the 31st January a standstill was brought to Goodison Park. Now this was not because of a goal, a foul or a penalty, it was simply because a man 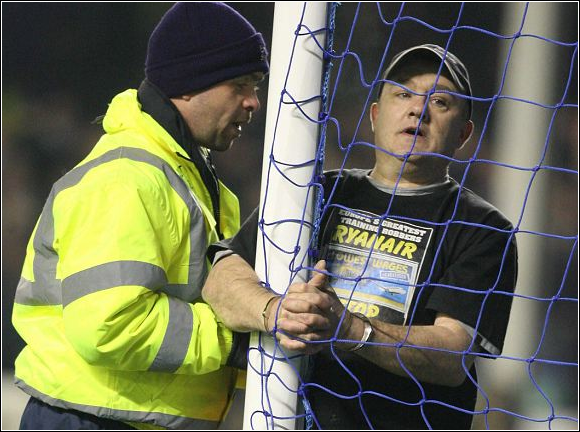 John Foley, 46 created the standstill because of the rage he held over the airline Ryanair axing his daughter! He made the game come stop for 5 minutes whilst police and security tried to get him free from the post. As he was a spectator, security attempted to catch him before he did anything stupid but they were not quick enough and this resulted in him handcuffed to the post.

John Foley was angered at his daughter being axed and the person who axed her, Mr O’Leary was in the stand watching the match and cheering on his favourite team, Manchester City. John Foley’s attire showed him to be wearing a Ryanair t-shirt which slammed the airline! The t-shirt rudely said ‘Europe’s greatest training robbers. Ryanair. Lowest wages guaranteed. Stop. Recruitment scamming our children.‘

The protestor is also the founder of the ‘Ryanairdontcare‘ campaign and on his release (from police bail) he blogged and apologised to both sets of fans as it was the latest outrage in a series against Ryanair. One of the other protests he arranged was that in February 2010 after he climbed onto the roof of the Crowne Plaza Hotel near Liverpool’s John Lennon airport.

The outcome of the game didn’t interfere with Everton’s play and they went on to defeat the Premiership Leaders after Darren Gibson (a former Manchester United player) scored the winning goal!