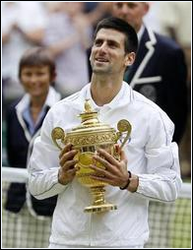 This was the Serbian’s first ever Wimbledon final despite winning 48 out of 49 matches this year. It was also confirmed on Monday, that Djokovic will be the new world number one.
Djokovic proved to be too much for two time Wimbledon champion, Rafael Nadal who has 10 grand slam’s to his name. The last time Nadal was beaten at Wimbledon was in 2007, a five set loss to Roger Federer in the Wimbledon final. Nadal’s record against Djokovic in grand slams read: played five, won five, so from the very beginning he was the obvious favourite.
Djokovic got off to a slow start in the first set but caught up to Nadal as he kept on winning rallies with two absolutely fantastic forehand winners which took them both to 30-30 with Nadal serving to stay in the first set. The Serbian won first set.
After that, it was breaking point for Nadal as he kept on making errors and missing his favourite forehand down the line. At this point, Djokovic was winning 2-0 but then unexpectedly, Rafael Nadal won the third set, which many hoped would lead to the young Spaniards triumph. However, it didn’t as Djokovic won the fourth set 6-3, making him the winner by winning 6-4, 6-1, 1-6 and 6-3.
As the realisation sunk in that he won, Djokovic knelt down to pick up a blade of grass which he then ate before throwing all of his three tennis racquets into the crowd. All of Djokovic’s friends and family screamed in disbelief because they all knew that Djokovic dreamed of winning Wimbledon as a small child and finally, that dream became a reality.