Yesterday two of of the world’s tennis players took to the court in an epic 5 hour match! Serbian Superstar Novak Djokovic and Spanish Sensation Rafa Nadal took to the Melbourne heat in what was called the longest Gland Slam final of all time.

The start of the match didn’t go so well for the world’s Number 1 by losing the first set 5-7, but sprung back to life winning the next two sets. The two sets remaining were a grueling test of strength and nerve but it all came to the end with a smashing back hand from Djokovic. 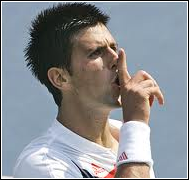 Nadal was graceful in defeat as the reigning Number 1 took the Australian Open for a 3rd consecutive year, making history alongside the likes of  Roger Federer, Andre Agassi, and Mats Wilander. After his win, Djokovic was interviewed by BBC Sport: “It was the longest Grand Slam final of all time. Just hearing that fact makes me cry, Wimbledon is right up there because it is the tournament I always wanted to win. But this comes out on top.”

Djokovic became injured in the quarter finals after his win with David Ferrer, and it was expected for the Serbian to ‘fall at the final hurdle’ but in this epic meeting, he came on top.