If you’re a one direction fan, get ready to go crazy! 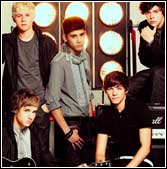 That’s right, 1D (one direction) shall be signing copies of their new new album at Whitely’s shopping centre in London Bayswater on Monday the 21st of November! 500 lucky fans (only 500 copies will be signed) will get a chance to meet the band when they visit HMV’s store in the Whitely shopping centre and will be able to get a copy of the band’s album (Up All Night) signed.

Their new album features the band’s UK number 1 single ‘What makes you beautiful’ which was released in September and it also features their new single ‘Gotta be you’ which was released on the 13th of November and already has over 6 million views on YouTube! There are also some songs on the album which have been written by Kelly Clarkson, Ed Sheeran and RedOne.

One direction consists of band members Niall Horan, Zayn Malik, Liam Payne, Harry Styles and Louis Tomlinson and have managed to cause quite a stir worldwide (especially with the women) with their music and looks.