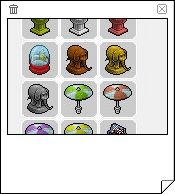 Mistakes are human, but sometimes a tiny mistake can result in huge consequences… it’s time to learn about a few mistakes that Sulake have made in the past!

On the 22nd of January 2005, 5 pages appeared in the Habbo Hotel UK catalogue – these 5 pages contained every rare released and Christmas furniture. The catalogue menu named the furniture range as “Palsternakka” (the Finnish word for ‘parsnip’) and underneath the header was the words “Lorem Ipsum” repeated over and over (‘Lorem Ipsum’ is used by graphic designers to show where text will be placed after completion.) Of course, this caused quite a stir for the 5 minutes it was there and caused rare values to drop dramatically – but the question is whether it was planned or not? It may have been an attempt to lower rare values in the hotel – a similar “mistake” happened on the Swedish version of Habbo which also caused rare prices to drop – or someone may have simply made a mistake.

* The free rares were never returned/removed.

France was the very first hotel to upgrade to version 9, but this upgrade caused some errors in reference to gaming tickets. The tickets became free for an entire day… basically, unlimited tickets! Many users bought large amounts of tickets and only a few were removed – most of the free tickets remained with users.

In 2006, ‘!x!Cherrydrops!x!’ won a game hosted by staff member ‘Disarno’. She was meant to receive a recently released ‘graphite sleeping bag’ as her prize but accidently received an un-released ‘army sleeping bag’ immediately making her rich. After many complaints by users, a moderator eventually picked up the sleeping bag and gave her the “correct” prize. 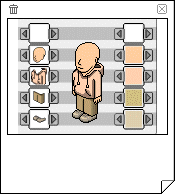 When all hotels upgraded to version 11, there didn’t appear to be any major errors… until something popped up in the Japanese hotel. Users from all countries signed up and logged into to Habbo Hotel Japan to wear clothes without any hair or eyes… scary! There is a picture showing this on the right.

BozzaNova (the former hotel manager for Habbo Sweden) released the bunny into the catalogue… at a price of -1 credits! Normally, this should subtract 1 credit from each user’s “balance” but instead it gave users 1 credit along with the bunny. Many users managed to gain free credits via this method and the credits were never removed/returned.

Here’s a story that’ll make you chuckle. The American and Canadian version of Habbo used to do similar competitions which only required 1 news article being written then posted twice. When the staff handed out the badges for the “Kappa Gamma” competition, they made a horrible mistake. Instead of the competition badges being given out, the staff badges were given out instead – along with every staff right. Sulake quickly had to “hit the panic” button and close the hotel whilst they retrieved stolen furniture and safety-ban accounts – after that, everything was back to normal.

The only depressing bit about that incident is the bans some users received. There was rumours that users who tried to moderate the hotel (like a Hobba would have) were banned whereas some who attempted to stole furniture were not… incredibly unfair.

[Denmark] Oops they did it again!

In 2009, the Danish hotel staff were meant to give out the ‘Chinese New Year’ badges to some players… but they accidently gave out the wrong badge. This time, the ‘Gold Hobba’ badge was distributed to many users – luckily for the staff that the badge did not come with any extra powers or commands… but we’re sure many users enjoyed showing off that badge.

‘Zen rocks’ were released a little too early in the Dutch hotel – but only a lucky few spotted this because they were under the ‘country’ section of the catalogue. After 5 minutes they were removed, and some people who had purchased ‘Zen rocks’ were considered rich… unfortunately leading to some unfair selling. Due to the rocks not being in the catalogue and due to there being very little of them, some people paid huge amounts to get some – prices as high as 15 HC Sofas! Unfortunately, when Zen was released into the catalogue, people realised they’d been cheated a lot of money.

With the release of 37 (including GuideBots) a little error occurred in regards to the ‘Bobba filter’. When a user said ‘ff’ to a GuideBot, the response would be “Falling furBobbames are…” when it should have been “Falling furni games are…”. We are not going to say what word caused the filtering because… it’s offensive.

In December 2011, ‘Freeze deal 6’ was accidently released into the .com catalogue at a price of 0 credits. It remained there for about 5 minutes and caused many users to go wild and purchase thousands of freeze items (there is a video of 1 user purchasing over 2400 freeze items) all for free! Unfortunately, this lowered the value of many freeze items to potentially ‘4 for 1c’.

On the 16th of January 2012, the ‘Banana shaker’ (from the ‘Lost Monkey’ application, was accidently released into the catalogue for a price of 1 credit. After about 60 minutes the ‘Banana shaker’ was removed and the ones purchased were not removed/returned.

This list of mistakes shows that even Sulake can make some silly errors at times! You have to admit though, some of them were pretty hilarious (probably not for Sulake though.)

Did you find any of the mistakes mentioned amusing? Have you been around to experience any of them? Share your view now by clicking ‘Read More & Comment’.