Taking a brief look at the newest game in the Devil May Cry series. 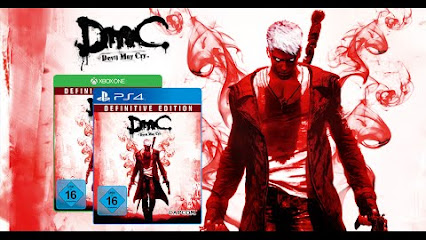 In this game you get the chance to delve even deeper into Dante’s past than the previous remake of the series released in 2013. The Definitive Edition has been remastered for the latest consoles, PS4 and Xbox One.
The 2013 game at first received a lot of criticism, especially Dante’s new look. Apparently Capcom wanted Dante to be a bit more of a bad boy and gamers who have played past games just weren’t feeling this all new Dante at all. But once people got past all this, they found the game play and storyline to be excellent although it was a little too easy.
Capcom took on people’s feedback from the 2013 title and have now improved this and rebalanced the game play.
This stands out from the other HD or remastered versions of games that offer up nothing but improved graphics. You can play through the 2013 edition the same way but The Definitive Edition offers up optional adjustments which makes the game more challenging, such as the Turbo Mode which speeds the game up and makes fights more intense. There’s also the Hardcore Mode which obviously makes the game much harder and the enemies more powerful. It also makes it harder to get the best combat rank. Also, Devil trigger times have been reduced so you have to rely on other skills.
All content already released for 2013’s DmC: Devil May Cry has been added into this game, including Vergil’s Downfall so there’s hours and hours of game play to keep satisfy you. There are also new Dante and Vergil costumes which have been inspired by Devil May Cry costumes of old.
The one fault in this game however, are the cutscenes. The cutscenes audio can tend to drift out of sync, it’s a shame because everything else looks so flawless. The graphics in the Definitive version are easily amongst the best on either console right now.
If you missed the 2013 edition but love Devil May Cry of the past, give this a try. To those that have played the 2013 version, there may not be enough content that’s different but with the various game modes and the challenges they present, why not give this another whirl?
All in all, I think this is a great remake of the remake…