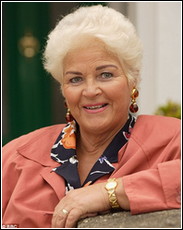 Pam St Clements, who has played iconic Pat Butcher in the British Soap Eastenders, has announced that she is bowing out of the soap.
Known for her terrible earring taste and famous slaps, Pam St Clements who plays Pat Butcher has announced that she will be leaving the soap at the end of this year after 25 years of being with Eastenders.
We’ve seen Pat go through everything, from prostitution to jail and even several marriages and a couple of affairs with the soaps most iconic and evil characters like ‘Dirty Den.‘ She’s even been through heart attacks and framed her stepdaughter Janine, for the murder of Laura Beale, who actually died accidentally, after learning that Janine pushed Barry Evans (son of her late husband) from a cliff in Scotland, resulting in his death. This poor soul has definitely been through everything!
Pam, 69 years old who joined the soap in 1986 says ‘I have enjoyed 25 and a half wonderful years in EastEnders creating the character of Pat but feel it’s time to hang up her earrings.‘
Pam St Clements is the second longest serving member of the cast, beaten by Adam Woodyatt who has been playing Ian ‘Weasle‘ Beale since February 1985 when the soap first started and is the only actor from the original cast that’s still in the soap.
This came as a shock to everyone as recently Barbara Windsor who played the small, mouthy pub landlady Peggy Mitchell, has also left the soap for good, meaning that the nation has lost two of the soap’s most iconic characters in history, over such a short time.
Executive producer of EastEnders Bryan Kirkwood, said: ‘Over the years we’ve seen her develop from a shrew into a matriarch, and Pat’s colour, warmth and steel have given EastEnders some of its most memorable stories. Pam will be missed by everyone in Walford, and we wish her the very best of luck in everything that comes next.’