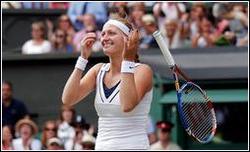 Eighth seed Petra Kvitova from the Czech Republic beat former Wimbledon champion Maria Sharapova from Russia, to win her first ever Grand Slam title here at Wimbledon.
Kvitova is the first Czech to win at Wimbledon, since Jana Novotna in 1998. The 21 year old proved to be too much for Sharapova, who was dominated by a 6-3 6-4 win.
The favourite for the match, Maria Sharapova won her first Wimbledon title back in 2004, when she was just 17 years old, defeating the champion at the time, Serena Williams and making her the second youngest woman to ever win a Wimbledon title. However, in 2007 Sharapova had a career threatening chronic shoulder injury which saw her ranking fall down out of the top 5 for the first time in 2 years.
It took several years and a lot of risks for Sharapova to get back up to where she left off before the injury and many expected that this years Wimbledon, would see the return of the Maria Mania, however, Petra Kvitova proved to be too much to handle and it still shows that Sharapova’s shoulder injury really has changed a lot and that she is not yet at her best, which makes you wonder, what she will be like after she has fully recovered from her injury…