A certain research poll may have given the game away on some new features hitting Habbo!

Every so often, Habbo Staff member, Yurre puts up a new poll in the Habbo Research Lab, this poll usually asks for our opinions on new features and furniture. Today I did a bit of scouting and filled out the latest poll, ‘Friend Stream & Black hole’ and came across some information that could be hinting at new features soon to hit the Hotel. 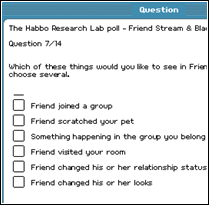 The new Friend Stream feature was released to the Hotel earlier this week, allowing you to see what your fellow buddies were getting up to on the Hotel. It can be activated by clicking the lightning bolt in the bottom right hand corner and allows you to see information such as the achievements your friends have earned, when they update their motto and even when they make new friends. The poll was simply asking what users liked and didn’t like about the Friend Stream. One question in particular, ‘Which of these things would you like to see in the friend stream?’ let the users pick from a variety of answers, including letting them see when a fellow friend changed their relationship status, and even if their pet had babies! It would definitely be exciting to have your pets have babies, but knowing Habbo, we’d end up having to pay or something like that.

What do you think of the friend stream? Personally it reminds me of Facebook, especially the possibility of being updated on peoples relationships, they’ll be no end to the Dating Rooms if this comes into force!