In his home town of Coriano, it has been filled with mourners for the funeral of the MotoGP rider, who was killed on 23/10/11 at the Malaysian Grand Prix. At the age of 24, Marco Simoncelli suffered chest, head and neck injuries after losing control of his motor bike, which then moved him into the way of oncoming motor bikes. It has been said that he had the potential of becoming a future world champion.

From his death have come with tears and sadness. Many flowers, messages were left in the town centre of his home town. Many of his supporters which 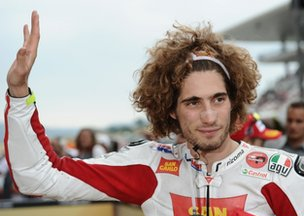 was mourning was wearing the number “58” in which was the number which he had on his helmet.

From the bottom of my heart, I believe that the sad death of this biker will affect the sport as we know it; that the biker has had a huge effect on the sport and will sadly be missed by millions of people around the globe.

If you have any comments on this, or you have something to say on this subject, and then click “Read More & Comment”, let us know what you think about this.

Congratulations – you have found the fifth item in the Habboxween News Quest! Take a note of the item you have found and the link to this article!
Click here for more information.