Throughout the month of June, Habbo has taken us on a tropical trip around Thailand!  Throughout the campaign, we’re expected to see the release of four wonderful new rares, each taking inspiration from a unique part of Thai culture – and we’re even being treated to a brand new Limited Edition Rare! The Gold Leaf God!

“Read More” to find out more about this Limited statue!

Many of this month’s items –  furniture, clothing and rares alike – pay homage to different aspects of Thai culture. From the rare Muay Thai Outfit directly referencing the traditions and importance of what the outfit represents between a trainer and a fighter, to famously traditional Thai wood carving methods that can be seen on display in Habbo’s new furniture line. It would appear that the upcoming LTD is no different!

This month’s LTD is inspired by the Yaksha – a guardian warrior in Buddhist mythology who is said to offer protection from evil spirits. These statues, often more commonly referred to as “Yaks”, are often spotted around temples and places of worship in Thailand and have been since the 14th century, with some even being on display in airports.

The most famous Yaks around Thailand are located at Wat Phra Kaew – the temple of the Emerald Buddha.  This is widely regarded as the most sacred Buddhist temple in Thailand, and is guarded by 12 Yaks with distinguishing names and physical features. The Yak set for release on Habbo bears a close resemblance to one of the giants protected this temple; Thotsakan. 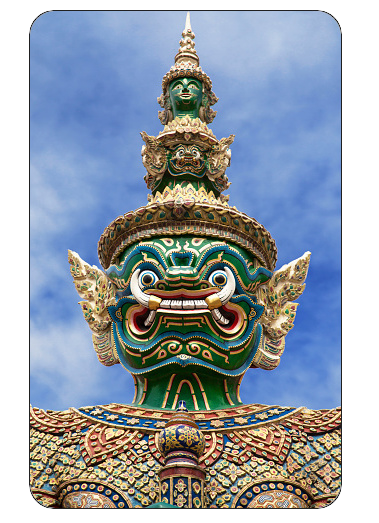 Whereas only four LTDs were released throughout the entire year of 2020, this is the fourth LTD to be released this year, with the most recent LTD release being just two months ago.

While the Disco Egg matched the Habbo Fashion Month campaign’s furni in appearance, this is the first LTD to be released this year that has direct ties into the theme of the campaign. Could the cultural inspiration and great attention to detail on this statue make it one of the most popular LTDs? Only time will tell…

What do you think of this LTD? Will you be buying one when they get released later today?

If you purchase one of these statues, be sure to update it on our wiki page here!

Love a good bit of research and learning! And really good that Habbo seem to have done some themselves for this one, I like this LTD a lot more now but sadly didn’t get on to buy it