Reality TV is buzzing, with the latest circuit of shows back on our screens, some of us can’t help but get addicted to those reality shows we watch and sometimes even get engulfed with the lives of the people on those shows- I even once woke up thinking I was a contestant on American Idol, then I realized it was all just a dream! 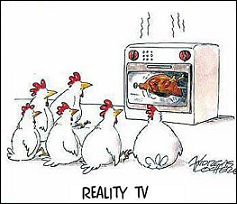 Well, if you have been dreaming or were stranded on a deserted island over the past couple of weeks, here’s what you missed! In the UK, Britain’s Got Talent has started filming for auditions in the wonderful city of Manchester, with flying dogs, Bolt660 impersonators, aspiring singers and so much more all in a whopper of a show. The man who has more Botox injections on his face than I have trousers,  Simon Cowell has returned as the head judge, the Generalissimo, the king…well you get the point by now! He is joined by returning, yet heavily pregnant judge Amanda Holden and two new additions to the panel Alesha Dixon, who was recently stolen from Strictly Come Dancing and comedian David Williams. Cowell himself, as the cocky man he always is, wants to blast the winner of this year’s show into orbit, signing a contract with Richard Branson and his new Virgin Galactic, which will facilitate this. Cowell also predicts ratings (as he so self-indulgently does every year) to go up to 20 million, as he believes it’s all about good contestants. Well, we’ll see if he’s right! What’s more, he nearly wet his pants, soiled them, then wet them all over again when he found out that the baby of the reality block, The Voice will be competing in the same timeslot as Britain’s Got Talent. Dear reader, I am starting to think that we may have some competition outside of the Cowell reality show monopoly.  The Voice is all about blind auditions where judges are facing the contestants’ backs, so will be judging purely on the voice and not looks, hence the name of the show. So Frankenstein, this show is for you! We’ll see how much momentum it steals away when it premiers in March 2012. Big Brother is also scouting for new housemates for the next season, with more drama consisting of a bunch of strangers stuck in a house for a prolonged period of time.

Across the Atlantic in the great US of A, we have more or less the same repeated formula as we witness in Britain. Yet again, we have a host, usually one with a big ego, stand there and present fake sympathy or joy for contestants. We saw that in the less than mediocre X Factor USA where the host looked like an incarnation of some post-apocalyptic disaster. So much so, than when I saw him hosting, I nearly wet my pants, soiled them, then wet them all over again. This man, by the name of Steve Jones looked like he was killing contestants backstage with the stiffness he presented in. His royal highness Simon Cowell was less than happy with this show and said changes will be made. Some of the changes many critics have recommended were to make it less staged, less gimmicky and removing Nicole Scherzinger, who cried so much last season, that I thought that she couldn’t speak anymore and was some alien off the planet Cryamoria who came here with some message to Planet Earth. Whilst, we get that sorted, it’s back to the daddy of all singing competitions- American Idol. American Idol has returned to our screens this week with a 16% drop in the show’s season premiere from last year. Idol has no changes this year, with the return of Randy ‘the Dawg’ Jackson, Steven ‘Plastic Surgery/Pedophile’ Tyler and Jenifer ‘I still think I’m 20’ Lopez. Whilst America’s Got Talent also got a new judge- Howard Stern, who was a controversial choice, as he actually said he would state his views- wow. The Kardashians are still going strong, so is Survivor, which goes to another paradise island very shortly.

Whilst many love such shows, some say the formula is getting old. With executives scrambling for changes every year it’s only a matter of time before such shows die, say some with people getting fed up of the gimmicks and will search for something fresh. Leave your comment on reality shows in the ‘read more’ section and tell us what you think of all the recent changes, shake ups and reality news!