During the San Fermin festival in Spain, runners have been knocked over, dragged and trampled on by fighting bulls weighing half a ton. 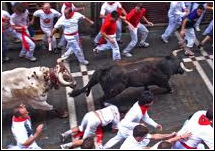 At least 10 people have been injured. Six bulls and six castrated steers raced and skidded through Pamplona’s winding, cobbled streets with thousands of thrill seeking people running among them. Overhanging balconies along the streets were packed with revelers while the bulls ran 846.6 meters to the city’s bullring from their holding pen. The beasts did the run in a very quick two minutes and 29 seconds.

Wearing the traditional white outfit with a red handkerchief, one runner sprinted ahead of a pack of three bulls, but was not able to outrun them. As he was knocked over, the runner was trapped between two of the animals and kicked by other bulls that were passing, before he was dragged then left sprawling in the street.

It was reported by the Red Cross that there were at least 10 injuries which included bruises, head injuries and dislocated joints. However, no one was gored in this fourth of eight bull runs that mark the festival, which continues until Thursday. The Sunday bull run at the San Fermin festival is the one that has the largest crowds and the organizers said that the high number of participants were to blame for the many slips and falls.

It is estimated that as many as 3,000 people took part. The most serious injury so far has been to a 25 year old Australian man during Friday’s bull run, when he was gored in his right thigh after he taunted a bull. A less serious injury occurred on Saturday when a 23 year old French man was also gored. At least 200 – 300 participants in the run are injured each year, most after falling, but some are gored or trampled by the bulls. Two years ago, a 27 year old Spaniard was killed after a bull gored him, piercing his heart, lungs and neck in front of hundreds of tourists.