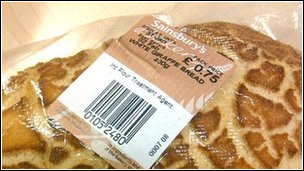 After 3 years, Sainsbury’s have decided to rename their “famous” ‘Tiger Bread’ due to a ‘suggestion’ from Lily Robinson – a 3 year old girl! She sent a letter to Sainsbury’s asking why it was called ‘Tiger Bread’ and not ‘Giraffe Bread’ & they replied saying it was a “brilliant idea”.

Her mother posted the letters on a blog and they instantly went viral. Many twitter users were discussing the ‘topic’ for  a while until it died down, but last week the letters re-emerged everywhere on social media sites. I’m sure that many of you will agree that the pattern of the bread is more suited to a giraffe than a tiger (see picture in the top right of this article.)

Chris King explained why it was originally called tiger bread and not giraffe bread; “It is called tiger bread because the first baker who made it a long time ago thought it looked stripy like a tiger. Maybe they were a bit silly.” Thankfully though, it has now been changed to ‘Giraffe Bread’ after a huge amount of customer feedback.

Lily Robinson also received a £3 voucher along with the response from Sainsbury’s.