We wave goodbye to our first evictee in celebrity big brother 2011! 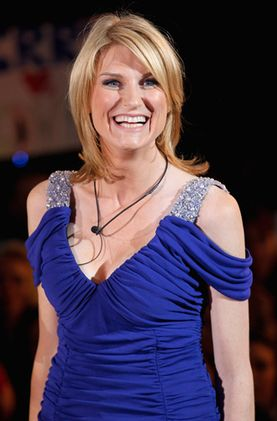 That’s right, unfortunately we had to say goodbye to ‘Sally Bercow’ last night as she became the first evictee of Celebrity Big Brother 2011. She received less votes from the public ( this year it’s ‘vote to save’ your favourite housemate ) than ‘Kerry Katona’ and ‘Bobby Sabel’.

She revealed in her interview with ‘Brian Dowling’ that she backed Jedward to win Celebrity Big Brother 2011 and she also thought that ‘Paddy Doherty’ would progress far, but she also expressed some of her dislike for ‘Darryn Lyons’ (Mr Paparazzi) by saying ‘I found him very much a man’s man and very much into the celeb thing.’

‘Sally’ explained that she felt ’embarassed’ to be the first evictee and that it felt like ‘a bit of a loser thing’, then to add insult to injury , it was announced that she only lost by a 1% margin.

It seems however that ‘Sally’ became popular with the public – as she received a huge cheer when she appeared outside the house, compared to when she first entered and received boo’s from the public – and on ‘Celebrity big brother’s bit on the side’ the audience were very negative towards ‘Sally’ being evicted and the majority wanted ‘Bobby’ evicted.

So what do you think. Did the public make the right decision to evict ‘Sally’ ? Is Celebrity Big Brother a lot better or a lot worse this year ? Share your view now by clicking “Read more and Comment” !