Loading...
Loading...
...
{Sneak Peek} Draft of the Illumina hotel view!0
By Habbox Archives - Posted 4th July, 2015 at 9:36 pm
The future hotel view?
An interesting picture was spotted on a staff member’s Twitter earlier today – an early draft of the “Illumina” hotel view design! You can tell it is an early draft due to the template having valentine themed quests and rooms on it (Illumina has been under development for months it seems) yet it is March! Anyway, here is the image of the “Illumina” (draft) hotel view design: 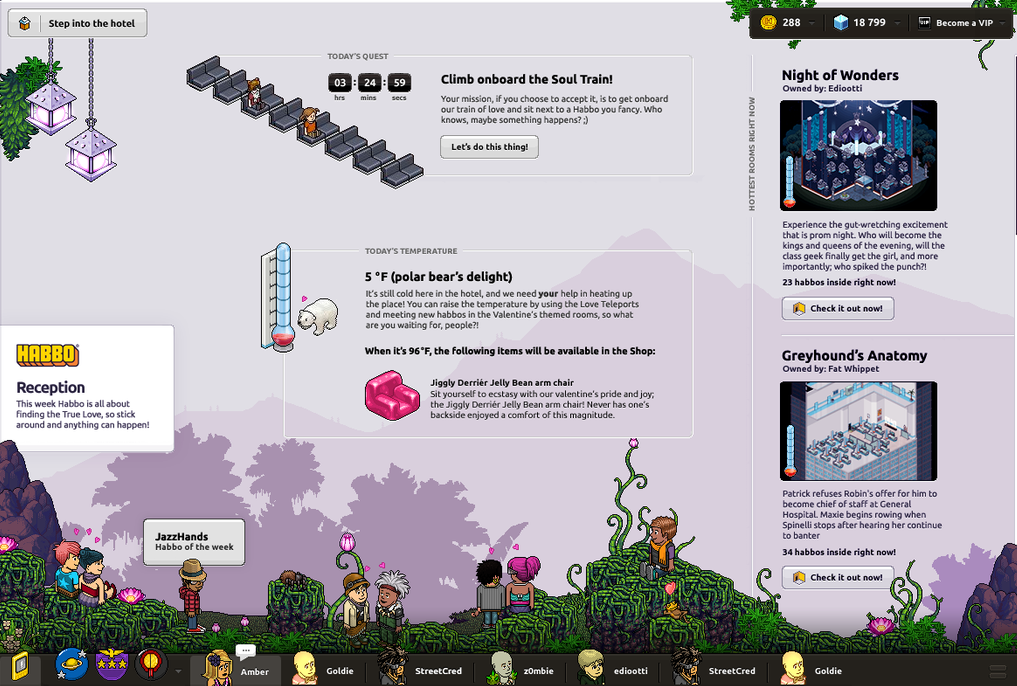 * Click the image to see a full size version!
As we can see, Sulake seem determined to keep the theme of quests and community challenges on the hotel view as opposed to having all quests, furniture, updates etc. placed on the general website. It’s a big change compared to a few years ago when they decided to increase the amount of information revealed on homepage – but this changeover (again) could have easily been predicted due to the www.habbo.se website only having basic information on the webpages (for anyone that doesn’t know, www.habbo.com will eventually get the www.habbo.se webpage layout, but it’s still being developed).
Another interesting feature about this hotel view layout is the “Habbo of the week” speech bubble placed near the bottom. Could this be chosen by pure chance (similar to the system on www.habbo.com/community where it places ‘Random Habbos’) or might it be some kind of new competition/feature for the future? Who knows?!
The best part about this hotel view is probably the “hottest rooms” on the right. At the moment, they’re only placed in a small box on the homepage and in a section of the navigator which not everyone will check. Placing them on the far right seems much more eye-catching and is actually laid out quite nicely.
Finally, before anyone starts claiming that the ‘black sections’ are definitely part of the new sidebar layout, take a look at a previous article which contains screenshots of the potential IM/PM updates and you will find that they have a different sidebar layout as well. Sulake aren’t making it easy for us to guess the final design I see (obviously due to the layout still being developed).
Some comments that people placed about the hotel view on Twitter were;
“Looks great! Hope to see more of these : )”
“I like that a lot! Awesome work my friend.”
“Wow, beautiful. I love it! ; )”
What’s your opinion on the hotel view? Share it by clicking “Read More & Comment”!