A solar storm has been passing over the Earth for the past few days with adverse effects still a potential issue! 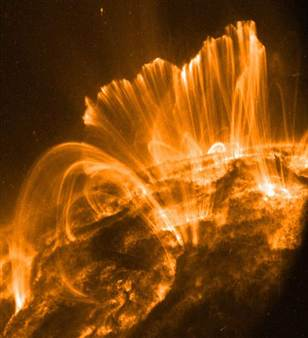 The solar storm has been striking the Earth since last week and there were many fears that it could have caused devastation on many electrical devices today. Luckily, very little damage was inflicted on the Earth’s magnetic field today due to the solar flares only causing moderate damage. However, we should still bear in mind that the solar storm will continue for a few more days so the effects on Earth could be felt tomorrow as opposed to today.

Effects? What effects?! Well, if the sun’s particles hit the Earth’s magnetic field at a tremendous force, a wide range of electrical systems can become disrupted. The main effects that a powerful solar flare could cause are;

– Satellites: Heating of the upper atmosphere can cause satellites to slow down and potentially change orbit. Ionic particles can also damage some aspects of satellites.
– Communications: Ions emitted by the sun can disrupt radio frequencies and distort signals.
– Navigation systems: Signals by airplanes and ships can be disrupted.
– Power plants: Solar storms can send magnetic currents to the Earth and these can disable transformers thus causing blackouts.
– Wildlife: Solar activity may affect animals (such as pigeons and whales) who navigate using the Earth’s magnetic field.

There’s no need to panic if you think that we are all going to be burnt to death! Solar flares don’t affect humans directly and have only caused 2 major problems in the past 100 years. The first incident occurred in 1972 when a geomagnetic storm prompted by a solar flare cause a long-distance telephone communication line to be knocked out. The second incident in 1989 plunged 6 million people in Quebec into darkness.