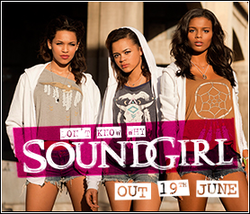 Win a badge with SoundGirl! New girl group, Soundgirl have hit Habbo and are popping in for a chat.

Soundgirl are a new British group made up of 3 girls; Olivia, 17, Izzy B, 16 and ‘Little’ Nikki, 14. They released their Debut single ‘I’m the Fool’ on April 19th of this year, and now we await the release of their next single ‘Don’t Know Why’. Miranda Cooper assisted the girls with this song which they filmed in Barbados and throughout the video sees them exploring the town of Bajan and seemingly having fun! They have toured with the likes of Pixie Lott and Justin Bieber to help promote their music infront of tens of thousands of future fans.

Head down to the Star Lounge on 15th June (that’s tomorrow!) at 4.30pm (UK time) to meet up with the girl band to chat about their brand new song ‘Don’t Know Why’.

If you fancy your chance at winning a badge, make sure you join the SoundGirl group page, aswell as making your way down to the Star Lounge and wait for the poll to appear with a question that asks you where Soundgirl recorded their latest hit ‘Don’t Know Why’.