Why, hello there! We can see you’re ready to join us on another trip through the history of Habbo. Today you will be hearing about the history of ‘Pre-Made games’, these are games which have already been developed by Sulake e.g. Battle Ball was a pre-made game but Falling Furniture isn’t. You will come across the names ‘Battle Ball’, ‘Wobble Squabble’ and many more – so you better keep reading!

* You may say that “Football and Freeze aren’t pre-made because users have to set them up!”, well the furniture items has been specifically developed as part of a game, so we will count them as pre-made.

Ok, time to get into the time machine, *enters time machine* and off we go…
Gaming Lounges 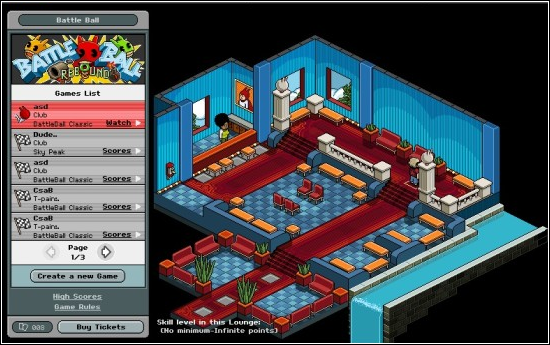 Before we get to the games. We must first mention, that there were specific ‘lounges’ you had to enter in order to join/create a game – e.g. If I wanted to join a Battle Ball game or create one, I would go to a ‘Battle Ball Lounge’ and find/create a game.
This only applied to Snowstorm and Battle Ball games – other games did not require this, but some other games did have specific rooms in which they were located in – e.g. Wobble Squabble was located in the ‘Rooftop Cafe’.
On the right, you can see a screenshot of a ‘Battle Ball Lounge’ (Sorry for the bad quality, it’s incredibly hard to find good quality images from before 2009.)

Also – we may mention that you had to pay ‘tickets’ in order to play some games. Tickets were sold at 2 for 2c, just in case you were wondering.

Battle Ball
This is the oldest pre-made game there ever was (we think.) Battle Ball was released in 2004 and was incredibly similar to Battle Banzai (Battle Banzai is simply, a spin-off of Battle Ball > Battle Banzai will be mentioned later) and had the same concept. Here were the rules/aims for Battle Ball;
1)  To play Battle ball, you had to have at least two teams, a red team and a blue team, if there were four teams, then green and yellow teams were added.
2)  Basically, all you have to do in Battle ball is to bounce over squares arranged in a certain way for each stage, on your space hopper. You had to bounce on a square three times to “lock” it, it would then become brightly lit up and no-one could go over it again (without special items).
3) The special items in Battle ball are often called “Weapons.” There were many different weapons, which do various things, some can make all teams the same colour, in order to assist one team, other weapons could undo locked squares, and one could lock a square in one bounce.

4) There were two different ways of winning a Battle Ball match, one is by making all the squares on the certain stage locked, and the other is to wait for the time to run out. (The second option was considered very lazy and pointless).
* It would cost 1 ticket to play Battle Ball.
There were a few tricks which could be used when playing Battle Ball such as ‘Fast-Locking’, this is when a person would constantly click in two different directions to make their Habbo bounce on two squares continuously to lock them quicker. The other method was by using an ‘Auto-Clicker’, however if Habbo suspect you are using an Auto-Clicker, a Macro or another device which “gives you an unfair advantage over other players”, you will be banned.
Unfortunately, in May 2009 (When Habbo transferred to Habbo Beta) Battle Ball was closed due to ‘Coding issues’. It was meant to be brought back – and was brought back in a slightly different form – ‘Battle Banzai’. Battle Banzai will be mentioned later on.
Snowstorm
Snowstorm or ‘SS’ was the next pre-made game to be released, it was released in late 2006 for some hotels and early 2007 for others. When players had joined/created a game which had started, they would be teleported to an arena where they could play Snowstorm! Here was the guide for snowstorm;
1) When the game started, the players would have to pelt the opposing team with snowballs while trying to dodge the other team’s snowballs. Players moved by using the mouse, clicking on a Habbo to throw a snowball at them, and using the Glove icon to replenish snowballs.
2) All players start with 5 snowballs and must refill when they are used up. When a player gets hit, their life bar goes down. Players can take 5 hits before they are down. When the life bar is empty, the player falls to the ground for approximately 5 seconds.
3) After they get up, their Habbo will briefly flash, during that time they cannot take damage when a snowball hits them (the snowball will go through them.) 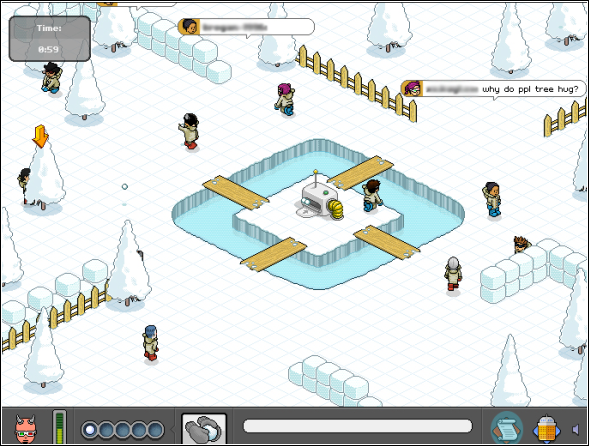 * Another way for users to replenish their ‘Snowball Supply, would be to stand next to a machine in the centre of the arena, which would give out snowballs.
There were a few tricks available in Snowstorm as well. Well, actually, only 1 trick – if a user held ‘Shift’ and clicked to throw a snowball, the snowball would ‘go higher’ through the air. This was used for striking people who would hide behind trees or barriers.
Here’s something I bet you didn’t know; Users who would hide behind trees in Snowstorm were called ‘Tree-Huggers’.
Unfortunately, Snowstorm was also removed in May 2009 – due to coding issues on Habbo Beta. However, 10 badges were discovered which feature 3 snowballs above each badge – these were rumoured to be part of a return for Snowstorm! Also, on a poll for Christmas 2011 events and on the Uservoice forum, there is a suggestion (placed by staff) about the possibility of bringing back Snowstorm this Christmas!
Wobble Squabble
Wobble Squabble was an incredibly popular game on Habbo – not just in the official room. The aim of Wobble Squabble was incredibly simple, make other opponents lose their balance but don’t lose yours! A meter on the left hand side, would display how balanced/un-balanced you were. 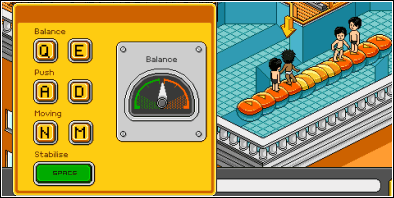 Wobble Squabble was located on the ‘Rooftop Cafe’ and also used to cost 1 ticket in order to play – you would also have to queue up for this game.
Unfortunately, Wobble Squabble was also removed from the hotel when Habbo transferred to Habbo Beta due to coding issues (again.) Sulake has/had plans for Wobble Squabble to return to the hotel, but no development has been made yet.
* Many users also made Wobble Squabble in their own rooms, in fact, just yesterday Habbox hosted a Wobble Squabble event!
Lido Diving

This could be counted as a game, or just an interesting feature first available in 2002. In V26 of Habbo, you could enter the lido deck and take a ‘lift’ to the top of a diving board – this would cost you 1 ticket to ‘take a dive’.
Unfortunately, this was also removed in Habbo Beta. There were no plans for it to return – considering the public rooms have also been removed, it seems unlikely it will ever return.
Football

The football furni line was released in June and July 2010 (it was released in 4 stages) as part of the ‘Habbo World Cup 2010’ campaign. This furniture line was one of the first furni lines to have ‘active furni’ (specifically, the football which could be rolled anywhere), so it sparked a lot of interest.
Football was not free to create, but did not require tickets in order to play – anyone can play football if they find a football.
Battle Banzai
Battle Banzai was released on the 21st of September 2010 as a spin-off of Battle Ball. This immediately caused a huge explosion of excitement from retro users wanting to test out the ‘new Battle Ball’. The difference between Battle Banzai and Battle Ball are;
. Battle Banzai is hosted in a guest room, whereas Battle Ball was hosted in a public room
. Battle Banzai requires you to purchase a timer, a scoreboard, tiles and portals in order to create a game

The new ‘ice’ furni line was released on November 30th 2010. Its main features were the new ‘ice skating patch’ – which immediately places skates onto the feet of a Habbo, creating a huge opportunity for more ice rinks to be built. Also, along with the ice patches arrived ‘Ice tag poles’. If you place one of these on an ice patch, a random Habbo will be lit up when they stand on the patch – if that Habbo walks through another Habbo, the other Habbo will become lit up.
Roller rink patches were released on February the 4th 2011, and had the same feature as ice skating patches (skates which would show up on a Habbo’s feet.)

Freeze
Freeze was released on December the 15th 2010 as a ‘branch’ of Snowstorm. Freeze contains a slightly similar concept, if a user gets hit by a snowball they are frozen. However, there are some slight differences between Snowstorm ad Freeze;
. It took 5 hits for a person to fall down in Snowstorm, whereas in Freeze it takes 3 hits and that person is knocked out of the game

. Freeze requires you to purchase a timer, a scoreboard, tiles (and blocks if you wish) and portals in order for you to play
. Freeze is also hosted in guest rooms whereas Snowstorm was not
. Snowstorm did not have specific badges – Freeze does
. Snowballs hit the ground in Freeze, compared to hitting a person in Snowstorm
. Freeze has weapons – Snowstorm did not
. Snowstorm required you to replenish your snowballs – you don’t need to on Freeze
Freeze was not an updated version of Snowstorm! If you read the paragraph on Snowstorm, you will realise that Snowstorm may be brought back for Christmas 2011
Puzzle box

The puzzle box furniture line was released in order to make mazes/wired mazes more elaborate and difficult. It can be combined with ‘Wired Condition: Selected furni has another furni on top’ in order to create a difficult maze.
* Double clicking the puzzle box will move it in the direction that you are facing, unless a barrier/obstacle is in the way.

This furniture line was released on April the 21st 2011, along with the pet chick. Bunny run was similar to ice tag, if you had a ‘bunny run patch’ which had an ‘egg tag pole’ on it, then a random Habbo would have their head turn into a bunny head shape. When that Habbo walked through another Habbo, they would lose their bunny head and give it to the other Head.
* The ice tag pole doesn’t work on bunny run patches and vice versa with the egg pole.
Here we are! Back at present time. We hope you enjoyed that exciting trip through the history of pre-made Habbo games and be sure to check out more special reports and other news articles on the number 1 fansite… Habbox!
What did you think of this special report? Which Habbo game is your favourite? Would you like to see Snowstorm return? Share your view now by clicking ‘Read More & Comment’!