Join us, as we take a trip back through the history of Habbo Club and VIP. Be prepared, it’s going to be a long ride… 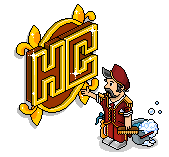 A very long ride indeed! We will first need to take a big step back, a step of almost 9 years to the 17th of December 2002 when HC (Habbo Club) was first introduced. So, where to start? HC/Habbo Club was introduced in December 2002 to provide certain users (who were willing to pay) with benefits on the hotel, from extra clothing to furniture gifts and to help Sulake gain some more money. Sulake also released VIP on the 13th of April 2010, to provide more users with better benefits and generate more profit for Sulake… it certainly worked! More and more users have been purchasing HC and VIP over the years in order to gain those extra benefits and now we’re going to explain HC and VIP in a lot more detail.

These were the monthly gifts for almost 8 years, until VIP was introduced and HC was modernised. After that, the new system of gaining free furniture every month was changed – instead of a pre-destined order system, you can now choose certain gifts when you join HC but you must reach a certain number of months in order to unlock all of the other gifts giving members much more choice over what piece of furniture they would like. The old HC gifts have also been replaced with some sleek and modern designs and here are the current ‘specialised HC furni’:

As you can see, there are 11 less gifts in the current selection of HC furniture. Well, it’s time to move on to the next feature in HC which is… Room Layouts!

Now, for the VIP furniture. VIP was only released in early 2010 so the furniture has not managed to change and neither has the system, the system currently works in the same way as HC gifts. However, unlike HC’s, VIP members can choose 2 gifts and here are the current furniture gifts available for VIP’s:

There are also 12 gifts for VIP’s to choose from + the 12 HC gifts = a total of 24 furniture choices (if they have ‘unlocked’ all the furniture items) to select. 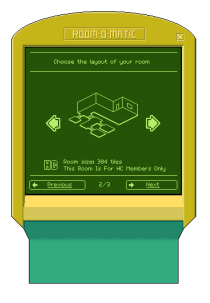 Before 2010, if you joined HC you would recieve 6 extra room layouts (and you would keep the non-hc room layouts as well) to choose from. Out of the 6 HC rooms, 2 of them were ‘miniature rooms’ consisting of a 74 tile room and an 80 tile room with stairs (two of the first 6 room designs which contained pre-made stairs!) The larger 4 HC rooms consisted of a 304, 336, 352 and a 316 tile room (all containing pre-made stairs). These were the only extra rooms HC members could receive until…

2010 again! When VIP is introduced into the hotel, 2 more rooms are added for HC members. The biggest room currently available (to HC and VIP) was introduced, containing 748 tiles and one of the first rooms containing gaps in the walls was added which contained 438 tiles. Now, let’s move on to achievements.

VIP members they have the original non-HC room layouts, the HC room layouts and 6 more rooms! They even get 2 rooms which don’t have walls in a section of the room and which require a teleport, pretty nifty isn’t it! The room creator widget for VIP’s contains the VIP rooms section which have 208, 396, 440, 456, 512 and 540 tiled rooms!

The second set of badges are a similar design, the old HC logo in a bronze colour is still there but for each of the 5 HC badges there are different

coloured banners underneath with a roman numeral on e.g. a green banner with I on it = 1 year HC. (The original bronze badge without a banner was for 1 month of HC purchased).

The final set of badges are the current ones in use, which can be spotted easily in-client or on this article.

When joining HC and for each month users are a member of HC, they will be given 100 pixels which you can use for special effects, rentals or some furniture. Members of HC will also receive 10 achievement points each time they receive the next level badge for HC membership (there are 5 badges to collect.)

VIP members have only ever experienced 1 design of badge which is currently in use, and they also have 5 stages of badge (also with roman numerals  along the bottom.)

HC and VIP members also receive 3 additional dances along with the normal ‘Dance’ command. They receive ‘The Rollie’, ‘Duck Funk’ and  ‘Pogo Mogo’.

Costs, commands and the Marketplace:

The price for 1 month of HC was always 20c, 3 months was 50c and 6 months was 90c until you guessed it 2010. In 2010, when VIP was introduced, the price of HC was lowered to 15c and the 6 month offer was removed, the 3 month offer was also changed to 45c… which provides no discount from buying HC 3 times. However, if you purchase HC then decide after ‘X’ amount of days you want to upgrade to VIP, you can upgrade to a month of VIP for a discount price.

The price for 1 month of VIP has always been 25c, and has been reduced to 20c on certain occasions. Whereas, this time the 3 months VIP offer is 50c providing a 15c discount compared to the 0c discount for the 3 months HC offer.

When placing items in the marketplace, you receive a message after posting ‘X amount of offers’ saying that you need to pay 1c to buy more offers. The ‘X’ for Non-HC/Non-VIP’s and HC members is 5 offers, so 1 credit = 5 offers. Whereas, for VIP members 1 credit = 10 offers.

All HC and VIP members get access to a ‘queue’ for a room if it is full. If a Non-HC/Non-VIP member tries to enter a room which is full, they will be sent to the navigator whereas a HC or VIP member will be offered a choice of whether to view the room in spectator mode or join the HC + VIP queue for the room.

There is some slight confusion into the history of the friend limitations, so we are writing this on a rough estimate.

We believe that there was no limitation on how many friends you could have before 2006 or there may have been an equal limitation for everyone – we are unsure! (If you are 100% sure of the limitations before 2006, inform us by posting a comment below.)

Clothes have been added over the years but HC and VIP members have always had the advantage – they have a much wider selection of clothes, colours and they can even save outfits! VIP’s get more clothes and colours than HC and VIP’s can save up to 10 outfits, HC members can save up to 5 outfits and Non-HC/Non-VIP’s cannot save any outfits.

Errors with HC/VIP: There has only be 1 problem which is spotted occasionally with VIP/HC users, when their VIP/HC runs out and the box at the top right hand corner displays “buy now” – they sometimes haven’t lost their VIP/HC e.g. Can still wear VIP/HC clothes, use :chooser etc. This is a simple problem which is resolved when the user refreshes the hotel, they instantly become Non-HC/Non-VIP again.

Confusion: In the past when Hobba’s still existed. There was a slight confusion between HC = Habbo Club and HC = Habbo Contact so to sort the confusion, in the end Sulake renamed Hobba Contact as ‘Moderator’.

Discrimination: Discrimination between HC, VIP and ‘Norm’ members has been around since 2002. Some HC members who were incredibly inconsiderate would prejudice against Non-HC members simply because they didn’t/hadn’t purchased Habbo Club, a very famous example of this (for users on Habbo.Ca) were a group of people called the ‘Pomlongs’. These were people who wore the long hair (available for men and women) under a pom-pom hat and often insulted Non-HC members thus gaining a bad reputation on V18 and V26 (Old skool Habbo and Shockwave).

Also, when VIP was introduced some HC members got a ‘taste of their own medicine’ by being discriminated against by VIP members, a perfect example of ‘Karma – “What goes around, comes around”. However, the discrimination still exists today with a majority of rooms specifically clubs, being called “HC & VIP ONLY!”.

Users also accuse the Staff/Sulake of being discriminatory towards Non-HC/Non-VIP users. If you glance at the pictures/avatars Habbo use all over their main site, there is rarely anyone dressed in a pure ‘Norm’ outfit – on the Habbo Homepage there is only 1 avatar dressed in ‘Norm’ clothes. Also, when regular clothes are released many ‘Norm’ users complain that Habbo don’t give Non-HC/VIP members any new and improved clothes or benefits e.g. Being able to save outfits.

This could be seen as discriminatory, or it could just be seen as a very good business method. Users will obviously crave the additional benefits, thus buying HC/VIP and in effect providing sulake with more revenue! That’s the business world.

*Exits time machine*. Here we are, present day! You just experienced the long journey of HC and VIP, we hope you enjoyed the long and bumpy ride and that you’re now more experienced in the history of HC & VIP.

Who knows, maybe they’ll make a Super VIP one day…