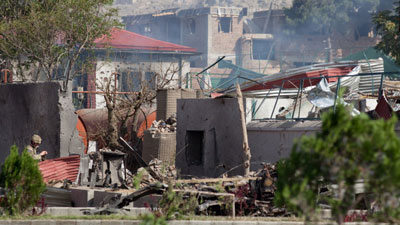 Taliban Suicide Bombers hit the British Council Offices in Kabul leaving two female teachers, one from the UK and one from South Africa, frightened for their lives, after hearing two large explosions.
G4S secure solutions have confirmed that six others, including three gurkhas and three afghans have been killed.

It’s thought that up to 5 people carried out the attack, each of their identities carefully hidden in Burkhas. One person from newzealand is also thought to be dead.

The blast, which occoured at 5.30am smashed windows on buildings up to a mile away, Britain’s Ambassador to Afghanistan, Sir William Patey, confirmed that all the militants were eventually killed. He said: “This was a dastardly, cowardly attack designed to attack British interests, but ultimately ending in the deaths of many Afghans, and we regret the death of the Afghans in this.”

Share your views, and comments by clicking “Read More and Comments”.