Are Sulake becoming more and more interested in Fansites again?

There has been much discussion lately on Habbo, HabboxForums, Fansites, UserVoice Forum and help.habbo.com over the issue of Fansites. Many people have been claiming that Fansites are no longer advertised enough by Sulake… leading many users to question whether they deserve a re-vote or simply to be promoted more by Sulake.

Well, good news just keeps on coming! We popped into the Habbo Research Lab today and spotted a brand new poll in there – with a question about Fansites. The first 4 questions are rather generic (e.g. “How old is your account) but the last question refers to Fansites! The question is; 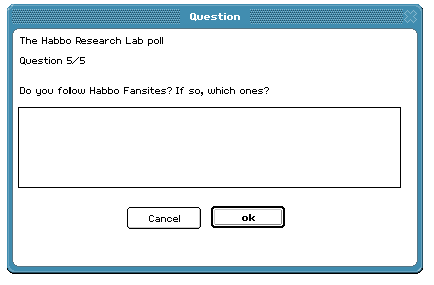 “Do you follow Habbo Fansites? If so, which ones?”

This has added to many rumours over the past months that Sulake could potentially be considering a re-vote on the list of official Fansites. In late november, rumours spread around a few forums that they were planning to do a re-vote in that month (November) in order to fill up the ‘event’ gap between Halloween and Christmas. Of course, these proved to be un-true but many people are still adamant that Sulake will be pressurised into doing a re-vote soon.

The last official Fansite re-vote was quite a while ago (over a year ago) and some of the users on Habbo feel that they need to have this list updated again. Some of the sites barely make attempts to advertise theirselves on the hotel and therefore become unknown to users. At the moment, Fansite owners have to send a ‘ticket’ through customer support in an attempt to either a) get their Fansite noticed via ‘official’ events placed in news articles or b) requesting their Fansite to become official.

However, some people are feeling that this poll may not be to do with a re-vote at all! This may just be another way of showing that Sulake are interested in the Fansites that people use and how many users visit them. There could be more advertising of Fansites in the future as opposed to a re-vote (hence the increase of Fansites asking Sulake to publish articles about events).

favourites as polls are often updated weekly and hints about future updates are often obtained here!

Some users on HabboxForum decided to comment on the poll, and here are their answers:

dbgtz: “It may improve, but I don’t see it getting as good as it was before.”
Jordan: “I think it’s great to see an increase in the relationship between Habbo and the Fansites now. I hope it only continues!”
Infectious: “Good to see them taking a bit more interest in Fansites. Something everyone has waited for I guess.”

We are all hoping that Sulake continue to take a keen interest in Fansites – after all, they are FANtastic!

Have you got a comment for this story? Do you think there needs to be a Fansite re-vote? Do you think Fansites should be advertised a lot more? Share your opinion now by clicking ‘Read More & Comment’.