Today is the day T4OTB head down to Weston Super-Mare! 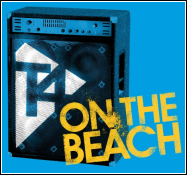 As most of us know, once a year around this time, T4 plan a special all day event on the wonderful Weston-Super-Mare beach in Somerset. T4OTB is a massive music party where around 50,000 music junkies unite as 1 for a spectacular afternoon of music performances, competitions and games, special guest visits from the likes of Gok Wan and Louie Spence plus cast from The Inbetweeners and Misfits and much, much more!

This years T4OTB Line-Up consists of:

and so many others. Unfortunately, Jessie J will not be performing due to her having a broken foot and boy-band JLS have also announced that they wont be performing due to technical issues. ‘Britain’s Got Talent’ dance group ‘Twist & Pulse’ will be making a guest appearance as well as ‘The Only Way is Essex’ and ‘Hollyoaks’ cast.

If like me you wont be attending this years T4OTB party due to tickets being sold out, you can watch it all on Channel 4 from 1:40pm – 5:25pm.

Also, whilst your watching why not get involved by posting a comment below on what you thought of certain acts?