The test has been repeated, the results have been verified and we can reveal… the particles have indeed broken the speed of light! 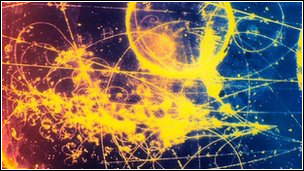 If you have a good memory, you will remember that in September a group of scientists discovered that neutrinos could have potentially broken the speed of light. This immediately sparked interest from around the world and caused lots of other scientists (including the original team which experimented on the neutrinos) to do more experiments on these neutrinos. Well, it’s 2 months later and the original team have done an improved version of their experiment and have come to the same conclusion… the neutrinos do travel faster than the speed of light.

The improved version of the experiment involved using smaller ‘bunches’ of neutrinos because researchers felt that using longer bunches could result in more errors. As you’ve read, the same conclusion was reached (that they do exceed the speed of light) and the accurate result was; that the neutrinos arrived 60 billionths of a second quicker than the speed of light.

The theory that the speed of light is the universal limit for speed was first put forward by James Clerk Maxwell and later incorporated into Albert Einstein’s theory of ‘special relativity’. This theory is the foundation for modern physics, and if it is proven ‘wrong’, then the entirety of physics may need to be re-evaluated.