Yesterday, 65,000 party people crowded into London’s Hyde Park for a day packed of great music. I was amongst those in the huge crowds, and it’s fair to say the acts certainly delivered a great show for those in attendance. 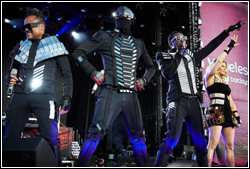 Despite the heat and the packed out audience, the atmosphere at the main stage in Hyde Park was incredible, leading up to the first act of the day, Example.

“London, this is like a homecoming gig for me,” he shouted to the audience in his set which included hits such as Kickstarts, Won’t Go Quietly and his recent number one single Changed The Way You Kissed Me, which whipped the crowd into a frenzy. He also treated fans by debuting his next single Stay Awake.

Greeted with a rapturous reaction from the crowd, Example made way for US superstar Bruno Mars who wowed with a spectacular set including his huge number ones Just The Way You Are and Grenade, as well as The Lazy Song, and a cover of Michael Jackson’s 1998 hit Dirty Diana which prompted a fantastic sing-along from the audience.

Mars’ energetic set left the main stage’s evergrowing crowd in a great mood for Tinie Tempah, who turned Hyde Park into a huge party with bangers like his Swedish House Mafia collaboration Miami 2 Ibiza, and number one Pass Out. Though another one of his biggest singles, Frisky, was strangely absent from the setlist, Tinie was overjoyed with the reaction from the London crowd, proclaiming that the sing-a-long to his number one Written In The Stars was “the most beautiful [he had] ever heard that song sung by anyone.”

Plan B was next to rock the main stage, and despite pulling out hits such as Stay Too Long and She Said, gave a lackluster performance and failed to get the majority of the crowd hyped up. Perhaps it was just the hot weather getting to the attendees, but the set lacked energy and much of the audience didn’t seem to be having a good time. Though credit must be given to Plan B for his excellent live vocals.

Then, headliners The Black Eyed Peas took to the stage and tore through an excellent set that lasted 1 hour 40 minutes, packed full of hits from their 13 year long career, including Where Is The Love, I Gotta Feeling, Shut Up and The Time. Member Taboo was clearly impressed by the insane reaction the band received, proudly shouting to the 65,000 strong crowd “I’m going to Tweet that this is the best show we have ever played on this tour!”

Their set included member Fergie belting out her solo hit Big Girls Don’t Cry, and will.i.am playing a short DJ set with classic songs such as Thriller, Smells Like Teen Spirit and Song 2.

Overall, despite a few technical glitches in the sound system which didn’t particularly effect fans closer to the stage, it was a fantastic day of music, topped off by a brilliant, fun and energetic set from the Black Eyed Peas, who truly rocked Hyde Park.