A recent study suggests that Immigration policy may be stuck between a “rock and a hard place” in dealing with public concerns. 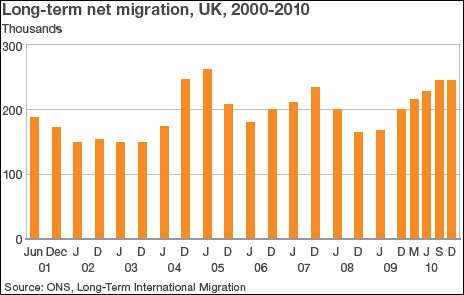 The study led by Oxford University, interviewed 1,000 participants and showed that people were most concerned about immigrant groups politicians could do little to cut. The research also found that there was broad support in the UK for a cut on immigration but the support was considerably lower in Scotland.

The report also found that approximately 70% of people wanted a cut in immigration – supporting previous surveys, and 1/5 of applicants said that they thought immigration should stay at it’s current level. It also found that 6 out of 10 people thought that immigrants arrived in the UK to seek asylum, which disagreed with the facts from the ‘immigration office’ – they show that just over a half of immigrants have arrived at the UK in search of work.

In fact, only 4% of immigrants stated that they were asylum seekers. The ‘migrant group’ that  the public were most concerned about was Low-skilled workers.

Here are the % of people supporting a cut, by category of migrant:

Scott Blinder, lead author of the report, said the team had tried to get behind blunt questions on immigration and establish whether public concerns mirrored government priorities. He said that while the public wanted less immigration, a majority were concerned about the groups that it was most difficult for the government to reduce.

The coalition government has not been helping lower immigration levels, as they rose by over 10% in the past year. So they have now set an aim of cutting  net immigration to tens of thousands by the end of the Parliament (2015.)

If you’d like to see the net immigration in the past 10 years, then take a look at the graph at the top right of the page.