The hit show “Hannah Montana” created by Disney Channel came and went and now we have a new teen
star. 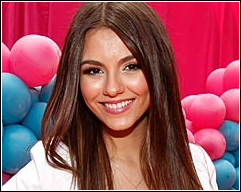 Miley Cyrus who played the role of Miley Stewart A.K.A Hannah Montana on the hit Disney show “Hannah Montana” for over three years and was an idol for young teens everywhere, but now there is a new teen sensation rising from Studios of Nickelodeon. You may know Victoria Justice from many shows, such as Zoey 101 and Victorious, and many believe she is going to be the next Miley Cyrus. Not only does she play a starring roll on a hit TV show, in July her face, along with her co-stars’ faces will be featured on over 250 products which can be found in Walmart. These items include DVDs, school supplies, clothes, and many more.

This 18-year-old has also begun filming a new movie called “fun size,” which is about a girl who loses sight of her little brother while trick-or-treating. This movie also starts: Johnny Knoxville and Thomas Mcdonell. You can be projects by Victoria Justice in the near future, You can also check out her hit TV show, “Victorious” on Nickelodeon (check you local listings).