Brace yourselves for barking, meowing and neighing as you’ve never heard before! 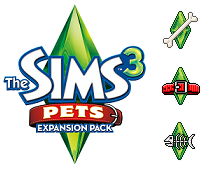 We’ve all heard of The Sims, create yourself a Sim, get it a job, marry it off, have a few kids, the end. Well not anymore, with the release of The Sims 3 Pets expansion pack you’ll have endless opportunities open to you! Create a pet or two and watch how it wrecks havoc (or peace) on your home. From guard dogs to horses to fish that look like clowns, the possibilities are endless!

If you’re a fan of The Sims 3, you’ll be pleased to hear that a campaign for the highly anticipated game, The Sims 3 Pets, will be coming to Habbo very soon. A little nosy around and a helpful hint goes a long way in Habbox, as we’ve discovered a group page that confirms you’ll be able to win three badges by getting involved in the campaign. Also on the group page will be links to the official site, where you can read up on everything about playing the game and catch up on the latest news and screenshots. It looks as though Habbo will quite helpfully also provide the link to pre-order a limited edition version of the game, which costs just £29.99. For all those pounds and pennies you’ll receive 10 exclusive breeds to play with!

Are you looking forward to this campaign, or will you be taking part simply to get yourself three new badges? For those of you interested in buying the game, it’s been announced that it will be released October 20th in Europe. Also note that although the game is available on PC, 3DS, Xbox 360 and PS3, pet horses are available only on the PC version.