Mel B has announced that the famous 90’s group, ‘Spice Girls’, will be reuniting this year for the Queen’s Diamond Jubilee! 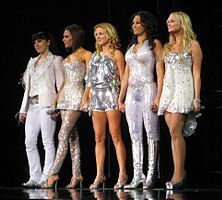 Mel B accidently let slip they would be reuniting for the Queen’s Jubilee on Australian TV show ‘Sunrise’ when she said “Ooh, I think the Queen’s Jubilee concert is the event I’d be looking at more closely for that to happen.” She desperately tried to distract the slip-up by quickly changing the subject but fooled no-one.

There had already been many rumours spreading round that the Spice Girls would reunite in 2012 but instead to celebrate the London 2012 Olympic Games. Mel B quickly erased these rumours though by confirming backstage that they would be performing at the Jubilee not the Olympics.

According to recent reports, Mel B had been trying to convince her fellow band members Geri Halliwell, Melanie Chisholm, Emma Bunton and Victoria Beckham to sign up for the exclusive performance.

The Spice Girls are the most successful British band since The Beatles – they have managed to sell 75 million records worldwide and have only produced 3 albums, a ‘greatest hits’ album and 12 singles. One of their most famous singles is “Wannabe” which managed to reach number 1 in over 30 countries!

This exciting news story has certainly spiced up my life!